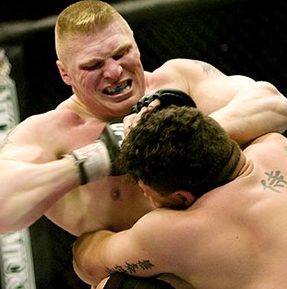 "This Isn’t The End of Brock Lesnar!"

Brock Lesnar joined UFC President Dana White on this afternoon’s media conference call to announce he was pulling out of the UFC 131 main event, in which a number one contender would be crowned to face UFC Undisputed Heavyweight Champion CAIN VELASQUEZ sometime this Fall.

In a stunning announcement, Lesnar announced he has suffered a relapse of Diverticulitis, and will not be able to compete against Dos Santos on June 11th. DANA WHITE announced Dos Santos would instead face SHANE CARWIN in the main event in Vancouver.

"I want to thank the UFC, I want to thank Mr. White and I want to apologize to Junior dos Santos and Spike TV," Brock told the media on the call, "This is an unfortunate situation for me. I dodged a bullet about two years ago with Diverticulitis, at that time not knowing what the problem was .. (This disease) is something that never goes away. It’s something I’ve dealt with since the first occurrence and I’ve been battling it."

Brock stated the recurrence of the disease didn’t allow him to train to full capabilities. "I was forced to make a decision to go back to the doctor this week," Brock revealed, adding "I’m choked up about it and there’s nothing I can do."

Dana White stated Brock "was all bummed out about pulling out of the fight … I told him (not to) worry about the fight … I’m glad it’s not life-threatening."

"I love this sport and I love what I do," Brock stated on the call, "This isn’t the end of Brock Lesnar!"

We will have more on this breaking story this evening, including comments from our own Hustler De Tuti Hustlers Paul Heyman on the situation.

We’re HustleTweeting about Brock and UFC 131 right, please feel free to join the conversation on Twitter HERE, or write to us directly at hustleoncrave@gmail.com