Brock vs HHH "IS ON" For Summer Slam! 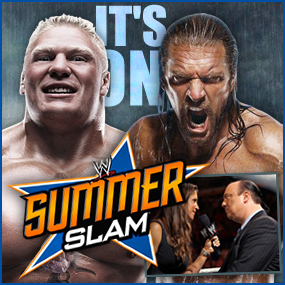 Brock Lesnar and HHH will main event the 25th annual Summer Slam on Sunday night, August 19th at the Staples Center in Los Angeles, as the 1000th edition of WWE Monday Night Raw witnessed a physical confrontation between the two, and a heated face-to-face between our own Hustler De Tuti Hustlers Paul Heyman and The Billion Dollar Princess Stephanie McMahon.

In AN ARTICLE POSTED ON WWE.COM, the sports entertainment conglomerate itself posted Lesnar was finally brought into action, when his crafty adversaries opted to poke a stick at the pride of the outspoken Paul Heyman. In response to the salvo fired by Triple H at No Way Out, Lesnar’s camp had responded for weeks with only cool refusals articulated by Lesnar’s lawsuit-happy representation. However, after Triple H’s wife, Stephanie, managed to get under the skin of the normally on-point former head of ECW at Raw 1,000, Heyman accepted the match on Lesnar’s behalf. The Billion Dollar Princess then attacked Heyman for repeatedly bringing her children into the discussion. This brought Lesnar to the ring and ignited an explosive physical encounter between The Game and his now official SummerSlam opponent.

Of course, we’re HustleTweeting about Brock vs HHH at Summer Slam (and Paul Heyman’s face-to-face with Stephanie McMahon at Raw 1000), and you’re more than welcome to join the conversation by following THE HEYMAN HUSTLE on Twitter HERE or write to us directly at hustleoncrave@gmail.com  Hey, have you checked out the Hustle’s Ultra High Quality You Tube Channel, with  exclusive videos featuring BROCK LESNAR’S “HERE COMES THE PAIN”  … ICE-T AND COCO’s SEX SECRETS … THE ULTIMATE WELTERWEIGHT BAD ASS NICK DIAZ … CONTROVERSIAL TEEN SENSATION TAYLOR MOMSEN … LEGENDARY MMA PIONEER FRANK SHAMROCK … THE WALKING RIOT MISSY HYATT … if you’re not subscribing, you’re missing something … and by the ways cheapos, it’s FREE! Yes, absolutely 100 percent FREE! What are you waiting for? Check it out HERE! 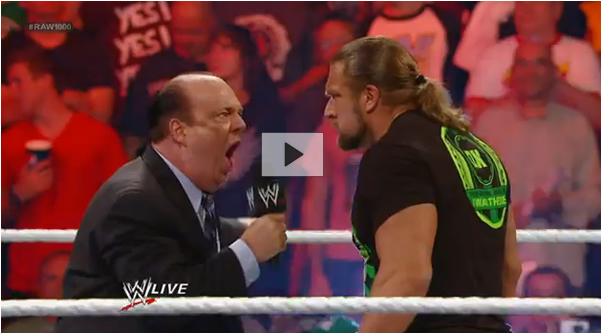