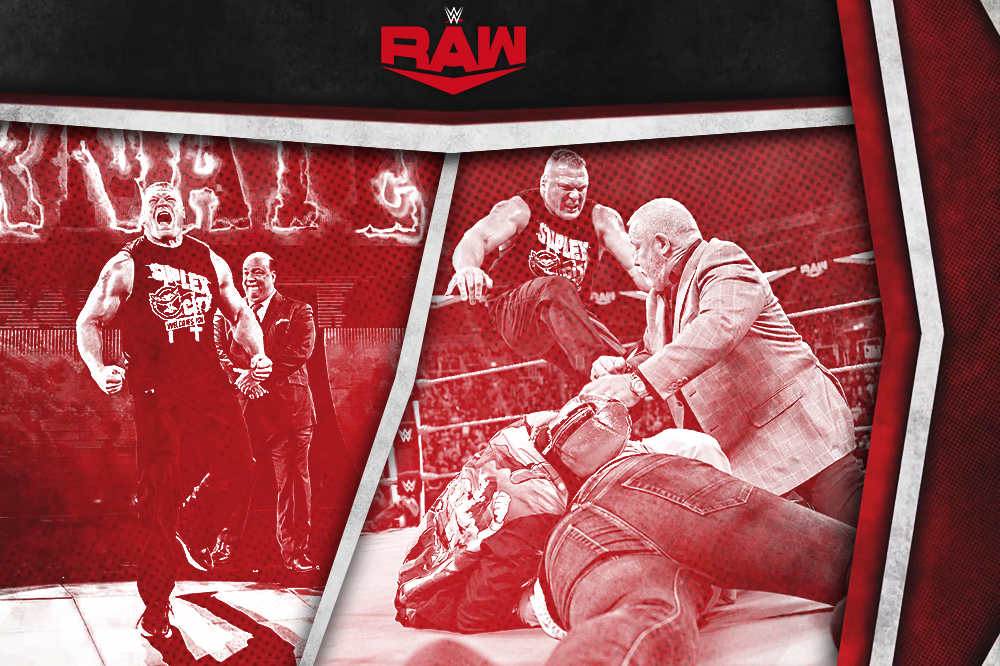 Our boss, Brock Lesnar‘s Advocate Paul Heyman certainly has his hands full. Is there even a way to describe what happened on RAW? Our friends at WWE.com have attempted to put some perspective to the carnage we witnessed on live television:

Brock Lesnar wasted no time making his presence felt on Raw’s season premiere, brutally ambushing Rey Mysterio and his son Dominick moments after the legendary luchador kicked the show off by dedicating his upcoming Universal Title Match to Dominick, who was sitting in the front row.

The Beast struck so fast that Mysterio didn’t even have a chance to prepare himself, administering a pair of F-5s mere seconds after The Ultimate Underdog snatched the mic from Paul Heyman’s hand in a gesture of defiance after Lesnar had done the same to Rey moments earlier. Mysterio certainly paid for his boldness, but Dominick got the worst of the attack by far. Lesnar hauled the young man out of his seat, manhandled him around the ringside area and suplexed him halfway across the squared circle. Neither Mysterio’s feeble attempts to shield his son nor Paul Heyman’s pleas from ringside were enough to stop Lesnar, who returned to his attack again and again in a dead-eyed trance, even shoving a few WWE officials who were trying to stop him.

The WWE Universe made no secret about their disapproval as Lesnar took a victory lap. The Beast even seemed to be experiencing a strange array of emotions as he paced across the ring. And needless to say, this certainly bodes ill for Kofi Kingston as he prepares to defend the WWE Championship against Lesnar on Friday Night SmackDown — it all made for a terrifying preview of what could await the beloved champion on SmackDown. And if this was Lesnar’s final time on Raw, it was also a potent reminder of what made him so scary and unique in the first place.

We’re HustleTweeting about the season premiere of WWE Monday Night RAW, and you’re welcome to join the conversation on the Hustle Twitter HERE and also on our hyper-interactive Facebook page HERE!