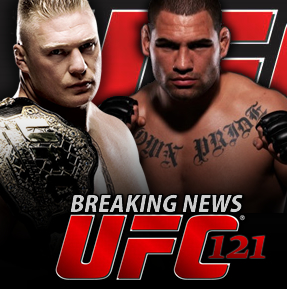 UFC President Dana White confirmed this evening that Brock Lesnar will defend the UFC Undisputed Heavyweight Championship against number one contender Cain Velasquez on October 23rd at the Honda Center in Anaheim, California as the main event of UFC 121.

Velasquez, who is 8-0 in his MMA career, is coming off his KO victory over Antonio Rodrigo Nogueira at UFC 110 in Australia this past February.

Lesnar, of course, just defeated Shane Carwin in one of the most thrilling heavyweight title matches of all time, forcing the tap out to an Arm Triangle Choke last Saturday night to unify the UFC Heavyweight Championship in the main event of UFC 116. Lesnar was the unwilling victim of a vicious and brutal onslaught from Carwin in the first round, and it appeared to many that referee Josh Rosenthal was close to calling the fight. But Lesnar kept showing life, and worked his way back up to his feet before pinning Carwin against the cage and using wrist control to contain the bad ass engineer from Greeley, Colorado.

In the second round, Lesnar took Carwin down to the canvas, and eventually applied a Arm Triangle Choke, a move Comprido recommended to Lesnar to utilize the former NCAA Division I Heavyweight Champion’s wrestling skills. 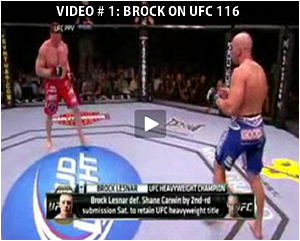 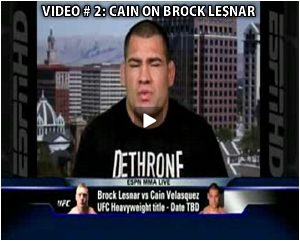