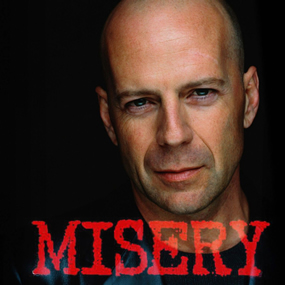 After all these years …

Bruce Willis will make his Broadway debut this fall as the bedridden novelist in a stage adaption of “Misery” best known from the 1990 film thriller that starred James Caan and, in an Oscar-winning performance, Kathy Bates as Annie Wilkes, the psychotic fan who holds the writer hostage after an automobile accident. According to The Hollywood Reporter, Bruce will play the Caan character and the New York theater star Elizabeth Marvel (“Other Desert Cities” and “Fifty Words”) will play the Bates character, the producers said on Wednesday in announcing the show.

The play is by William Goldman, who wrote the screenplay for “Misery” (based on the Stephen King novel) and won Academy Awards for his film scripts for “Butch Cassidy and the Sundance Kid” and “All the President’s Men.”

Will Frears will direct the play. He staged a world premiere of the stage version in 2012 at Bucks County Playhouse in New Hope, Pennsylvania. Performance dates and a Broadway theater will be announced later. “Misery” will be produced by Warner Bros. Theater Ventures, Castle Rock Entertainment, and Raymond Wu. Of course, we’re HustleTweeting about Bruce Willis on Broadway, and you’re more than welcome to join the conversation by following the Hustle on Twitter HERE or write to us directly at hustleoncrave@gmail.com Hey, have you checked out the Hustle’s Ultra High Quality You Tube Channel, with exclusive videos featuring OUR WORLD EXCLUSIVE WITH MIKE TYSON … BROCK LESNAR’S “HERE COMES THE PAIN” … ICE-T AND COCO’s SEX SECRETS … MMA BAD BOY NICK DIAZ … the list goes on and on, so if you’re not subscribing, you’re missing something … and by the ways cheapos, it’s FREE! Yes, absolutely 100 percent FREE! What are you waiting for? Check it out HERE!