Exclusive 360 Coverage of Bully Ray vs D-Von on Coney Island! 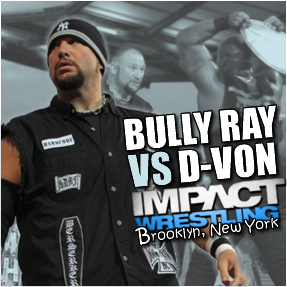 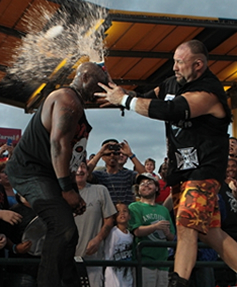 Bully Ray and D-Von, the most decorated tag team in the history of professional wrestling, have been known all over the world as The Dudley Boys and Team 3D. Now they are sworn enemies in TNA, and they took their wild feud to the MCU Ballpark, home of the Brooklyn Cyclones, during TNA’s 2nd annual event on Coney Island.

“Bully Ray has completely re-invented himself, and is obviously in the best shape of his shape,” commented long time pro wrestling photographer Bob Mulrenin (who, along with George Tahinos and Hollywood Charlie
provided 360 coverage of the event for THE HEYMAN HUSTLE), “and seeing D-Von take the fight to him is exactly what the audience paid to see!”

Of course, we’re HustleTweeting about the wild brawl, which saw D-Von get his hand raised as the victor, and you’re more than welcome to join the conversation by following the Hustle on Twitter HERE or write to us directly at hustleoncrave@gmail.com

CLICK ON THE PICS BELOW TO SEE THE ENTIRE GALLERY FEATURING
BULLY RAY VS D-VON’S WILD BRAWL ON CONEY ISLAND!