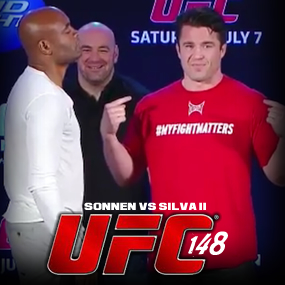 It is UFC’s most anticipated fight of 2012, and it’s not going to take place in Brazil. The stars all aligned for the lucky people planning on seeing UFC 148, which was originally to feature a trilogy fight pitting Bantamweight Champion Dominick Cruz against Uriah Faber (which will now be moved to the co-main event), as Middleweight Champion Anderson “The Spider” Silva’s rematch with Chael Sonnen will now headline what can only be described as a Supercard.

“Everything that could go wrong went wrong,” UFC President Dana White said of trying to stage the fight in Brazil during a press conference just moments ago in Rio de Janeiro. “We couldn’t pull it off fast enough.”

Zuffa, the parent company of UFC, first hoped to hold Silva vs. Sonnen II in Sao Paulo before recently announcing it would take place in Rio at Joao Havelange Stadium. But a scheduled United Nations conference on sustainable development in Rio the same week put a halt in those plans. Brazilian tourism officials didn’t want both events to take place simultaneously, and there weren’t enough hotel rooms to accommodate the demand.

“Regardless of where this fight is,” Silva said. “I’ll be representing Brazil.”

A scaled down version of UFC 147 will still commence, with the venue switched to an arena. “The Ultimate Fighter: Brazil” coaches Vitor Belfort (21-9 MMA, 10-5 UFC) and Wanderlei Silva (34-11-1 MMA, 4-6 UFC) will stay on the card, and UFC Featherweight Champion Jose Aldo appears to be set to headline.

“We will be the biggest sporting event in the history of combat,” Sonnem said at the press conference this morning. “My plan was to come here, take your money and beat him right here (in Brazil). I’m going to have to wait and stomp him July 7 and that’s exactly what I’m going to do.”

Of course, we’re HustleTweeting about UFC 148, and the chaos surrounding the Silva-Sonnen rematch, and you are more than welcome to join the conversation by following the Hustle on Twitter HERE or write to us directly at hustleoncrave@gmail.com  Hey, have you checked out the Hustle’s Ultra High Quality You Tube Channel, with  exclusive videos featuring BROCK LESNAR’S “HERE COMES THE PAIN”  … ICE-T AND COCO’s SEX SECRETS … THE ULTIMATE WELTERWEIGHT BAD ASS NICK DIAZ … CONTROVERSIAL TEEN SENSATION TAYLOR MOMSEN … LEGENDARY MMA PIONEER FRANK SHAMROCK … THE WALKING RIOT MISSY HYATT … if you’re not subscribing, you’re missing something … and by the ways cheapos, it’s FREE! Yes, absolutely 100 percent FREE! What are you waiting for? Check it out HERE!