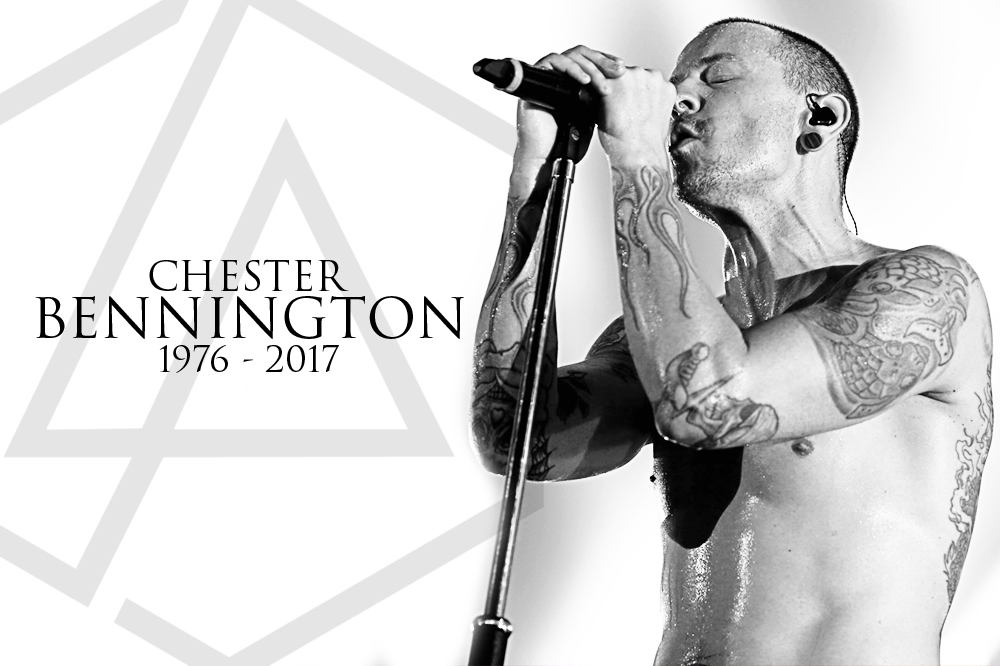 Chester Bennington, the charismatic co-frontman of one of the biggest rock bands on the planet, Linkin Park, has died at his home in Palos Verdes, California. His death was confirmed to be suicide by hanging by the Los Angeles Department of Medical Examiner-Coroner. A bottle of alcohol was also reportedly found in the room, but not near his body. An autopsy is pending. He was 41-years-old.

Amidst a huge outpouring of sympathy, condolences and memories of Bennington from countless shocked and heartbroken fans, friends, and collaborators, his bandmates in Linkin Park took to social media to post a wordless but emotional tribute: a photo of the singer surrounded by the lights of thousands of fans’ phones during a concert.

The band also set up a tribute page, #RIPCHESTER, on their official website, including suicide prevention helpline resources.

“Chester Bennington was an artist of extraordinary talent and charisma, and a human being with a huge heart and a caring soul. Our thoughts and prayers are with his beautiful family, his bandmates and his many friends. All of us at WBR join with millions of grieving fans around the world in saying: we love you Chester and you will be forever missed.”

Chester Charles Bennington was born on March 20th, 1976 in Phoenix, Arizona. He took heavy interest in music at a young age, inspired by bands like Depeche Mode and, the band that he dreamed of becoming a member of, Stone Temple Pilots. He began his music career in the early 90’s with “Sean Dowdell and His Friends?” and post-grunge act “Grey Daze.” After finding little success, Bennington was left frustrated and ready to give up on his dreams altogether before being offered an audition with the future members of Linkin Park. After a successful audition with the band, then known as “Xero,” Bennington quit his day job at a digital services firm, moved his family out to LA, and the rest is history…

In addition to the massive success Bennington achieved with Linkin Park and a few solo frays, he would also actually achieve his dream of becoming a member of Stone Temple Pilots, briefly replacing the late Scott Weiland on vocals from 2013 to 2015, before parting ways to focus fully on Linkin Park.

Nearly 18 years, countless awards and nominations (including 2 Grammy wins), over 70 million albums sold worldwide, and six No. 1 billboard albums later – albeit with some demons and deep strokes of darkness – Chester Bennington‘s legacy fronting Linkin Park will always largely be one of inspiration and hope.

Linkin Park‘s latest album, “One More Light,” dropped this past May and debuted at No. 1 on the Billboard Top 200. They were scheduled to co-headline the upcoming “Welcome To Blinkin’ Park” tour with Blink-182, set to kick off at New York’s Citi Field on July 28th.

Bennington’s death came only two months after the suicide of his close friend and fellow rock royalty, Audioslave/Soundgarden frontman Chris Cornell, and on the day of what would have been Cornell’s 53rd birthday. He performed “Hallelujah” at Cornell’s funeral back in May.

He is survived by his wife and six children.

We’re HustleTweeting about Chester Bennington, and you’re more than welcome to join the conversation on the Hustle Twitter HERE and also on our hyper-interactive Facebook page HERE!