Gabe Sapolsky: "CM Punk and Daniel Bryan on Top of the World Means ..." 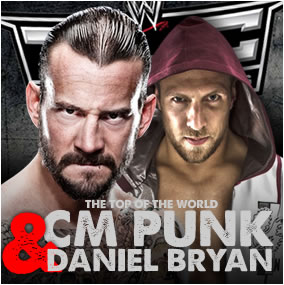 At last night’s WWE Table Ladders and Chairs pay-per-view, CM Punk retained the WWE Title while Daniel Bryan won the World Title. I had the privilege and good fortune to book both Punk and Bryan as Ring Of Honor World Champions. When both stood atop WWE Universe last night the only thought that came to mind was “FUCK YOU!!!!”

I’m not one to say “I told ya so” but I said years ago that Punk and Bryan (known as Bryan Danielson on the independent wrestling scene) would accomplish what they did last night. I didn’t just say that because of their in ring abilities or natural connection to the audience. I believe in them because they have those special intangibles that separate the greats from the wannabes and the elite from the greats. It’s not just extra time in the gym or studying a craft. It’s an inherent drive, a determination, a leadership gene. Let me illustrate.

It had been planned since 2004 for CM Punk to become ROH World Champion in the summer of 2005. Then one spring day Punk walked into my office in Bristol, PA and said that WWE offered him a developmental deal and he was going to take it. I tried to play it cool, and I knew Punk would end up in WWE one day, but this floored me and caught me totally unexpected. Punk was by far our biggest merchandise seller, he was a main eventer and all plans were set on him to carry the company.

I had a moment of anxiety and then Punk proved why he has that intangible. He said he would stick around for the summer, give us some great matches that would sell DVDs and let us adjust for changing direction. In addition, he gave us some memorable matches in Full Impact Pro (which I was also booking at the time), including his final match against Colt Cabana. He didn’t have to do this and could have headed right to WWE developmental territory Ohio Valley Wrestling to become the newest Paul Heyman guy. The legendary Summer Of Punk went down in the history books as a result.

Bryan was a talent I depended on from the very first ROH show to my exit from the company in October, 2008. In fact, he main evented that first ROH show, which also happened to be the first show I ever booked. Bryan matured and grew with the company, constantly being an “ace” and backbone of the promotion. No one was more respected by his peers. I call him the number one guy in ROH history. When the “tie” incident took place and Bryan departed WWE in 2010, I was fast to hire Bryan in the new promotions I was booking- EVOLVE and Dragon Gate USA.

Bryan’s presence would elevate both companies. I suspected he would end up in WWE again, but thought we’d have at about 6-12 months with him. However, after just a few weeks WWE rehired Bryan for a surprise return at Summerslam in August. I was happy for him, but at the same time that anxiety swept over me because we had Bryan in the main event of our EVOLVE and Dragon Gate USA September events. On top of it, WWE had a Europe tour during the DGUSA weekend so Bryan might not be able to just miss a few dates.

I should have known not to waste any time worrying. Bryan stepped up as he always did and proved why he has those intangible qualities. He didn’t want to disappoint the fans who already bought tickets for those events. He ended up wrestling on the EVOLVE 5 card and put on a MMA influenced slugfest against Munenori Sawa. Then not only did he make the DGUSA dates, but he provided two incredible matches. First, he put on a clinic against YAMATO at “Untouchable 2010” and then he faced Jon Moxley at “Way Of The Ronin” in a match that can only be described as a fight. Funny thing, Moxley just wrestled Bryan again last weekend. This time as FCW standout Dean Ambrose on WWE house shows (cheap plug- DVDs of all Bryan’s DGUSA and EVOLVE matches are available at www.DGUSA.tv at discounted prices for a limited time).

So my “FUCK YOU” isn’t for Punk or Bryan. I am beyond happy for both and excited for their futures. For years, I had to hear critics, journalists, naysayers and detractors tell me reason after reason why neither would ever make it under the bright lights of WWE. They picked both Punk and Bryan apart trying to highlight every weakness they perceived that they had. To all of those people I proudly say “FUCK YOU.”

Bryan and Punk prove that independent wrestling has today’s new stars. I believe we have several of these athletes now in Dragon Gate USA and EVOLVE. Talent like Johnny Gargano, Ricochet, Akira Tozawa, Sami Callihan, Chuck Taylor, Rich Swann, Uhaa Nation, PAC, Brodie Lee and AR Fox, to name a few, have arrived. They aren’t tomorrow’s stars, they are today’s new generation. I said it about Punk and Bryan in 2005 and I’m saying it today about these exciting performers. If you aren’t already watching, it’s time for you to start paying attention and enjoy the ride to the top of the WWE Universe.

Since it’s the night before Hanukkah we thought we’d give Gabe a plug:

-EVOLVE returns to action on January 14th at The Asylum Arena (former ECW Arena) in South Philadelphia.
-DGUSA will hold live events on January 29th in Los Angeles, March 30th & March 31st in Miami.
-There are several sales on DGUSA and EVOLVE DVDs and gear at www.DGUSA.tv or 267-519-9744 for the holiday season.
-All DGUSA and EVOLVE iPPVs at www.WWNLive.com On Demand are 33% off and just $9.99 for the holiday season.