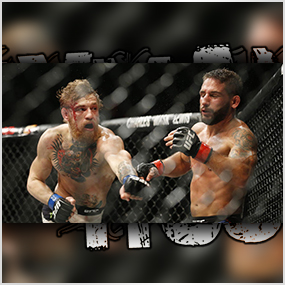 In what will undoubtedly go down as one of the greatest (if not “thee” greatest) UFC events in history, Conor McGregor survived multiple takedowns and a ground n pound attack from Chad Mendes to emerge as the UFC Interim Featherweight Champion, knocking out Mendes with just seconds to go in the 2nd round. It was an amazing night of fights, including one of the most brutal fights in UFC history as Ruthless Robbie Lawler broke Rory MacDonald‘s nose (and in reality, just smashed in his face) and defended the UFC Welterweight Championship. Our very own Hustler De Tuti Hustlers Paul Heyman was LIVE AND INTERACTIVE with our HustleTweeters during the event, and you’re more than welcome to join the conversation about the event by following The Heyman Hustle on Twitter HERE! You can also post your thoughts on our Facebook page HERE!  If you feel compelled to write us, please do so at HustleOnCrave (at) Gmail.com