Could Al Pacino Be The Next Marvel Villain? 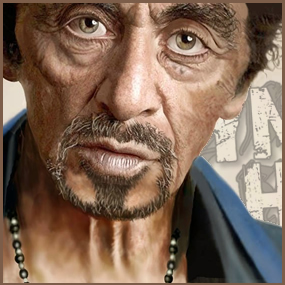 Michael Corleone. Tony Montana. The Devil who needed an Advocate. Al Pacino’s being playing bad guys since before playing bad guys was cool. Now he may be embarking on a whole new villainous journey!

74-year old Oscar Winning Actor Al Pacino might be the next great Marvel movie villain. The New York-born legend was a guest on the Happy Sad Confused podcast on Monday where he teased a possible role in an upcoming film from the studio that has brought you Guardians of the Galaxy and The Avengers. Wait a second. AL F’N PACINO IS DOING PODCASTS? Wow. Welcome to the digital age, ladies and gentlemen!

“I’ve met with the Marvel guy,” said Pacino, referring to the studio’s president Kevin Feige.We love the fact Pacino didn’t know his name. It’s so … so … Pacino!  “It’s a Marvel how things happen.” He continued,“I would imagine that either there’s something he feels is right for me …”

Then Pacino’s phone rang, almost as if on cue. He then joked that the call was from the studio telling him to quit talking. F’n Pacino, man!

Pacino said that he watched Guardians of the Galaxy with his children. “It was just inventive, funny, strong, the production of it, the ingenuity of it,” he said. “Why wouldn’t I like a movie like that, appreciate a movie like that? I’m not necessarily going to be in it, but there’s value to it.”

Of course, we’re HustleTweeting about Al F’n Pacino, and you’re more than welcome to join the conversation by following the Hustle on Twitter HERE or write to us directly at hustleoncrave@gmail.com Hey, have you checked out the Hustle’s Ultra High Quality You Tube Channel, with exclusive videos featuring OUR WORLD EXCLUSIVE WITH MIKE TYSON … BROCK LESNAR’S “HERE COMES THE PAIN” … ICE-T AND COCO’s SEX SECRETS … MMA BAD BOY NICK DIAZ … the list goes on and on, so if you’re not subscribing, you’re missing something … and by the ways cheapos, it’s FREE! Yes, absolutely 100 percent FREE! What are you waiting for? Check it out HERE!

CLICK ON THE PICS BELOW TO SEE THE HEYMAN HUSTLE’S
EXCLUSIVE PHOTO GALLERY OF AL F’N PACINO MEETING THE THRONGS OF MEDIA!