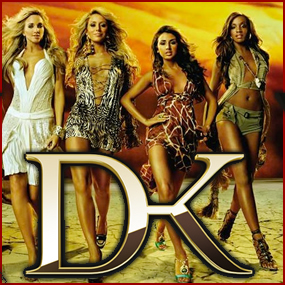 Aubrey O’Day and Co. Release First Song in Five Years … but there’s one original not part of this second go-around!

Danity Kane is back, as the all-girl band has released “Bye Baby” its first song in five years. The release was welcomed by critics, who applauded the group’s song, which centers around the cliché of heartache and moving on from a lost love. According to Boombox, the new single is the first to be released by Danity Kane‘s remaining original members since they announced their reunion at the 2013 MTV Video Music Awards pre-show.

Hustle Hottie Aubrey O’Day stated,“You know we’ve just grown. We’re more mature women … This time we wanted to come back on our own free will. We’re in the studio right now (and) actually with Stereotypes, who did Damaged. And we have a new song that we love called Rage. So we’re really excited about that.” Aubrey continued, “It just got to a point where we were reaching a place in all our individual careers where we felt like we established a lot of the things we wanted to develop within ourselves, but we were still missing the pieces of what we had started off with and we didn’t want anyone to define that for us.”

There is, however, one key member of the original band missing …  D. Woods aka Wanita Woodgette. Woods said that when she expressed interest in a reunion, no one else was in agreement. But in an August, 2013 interview with US Weekly, Woods said  “Much love to the ladies of DK!! They have decided to reunite and I, like our amazing fans, will be cheering them on.”

Aubrey, Shannon Bex, Dawn Richard and Aundrea Fimbres are currently putting the finishing touches on their third Danity Kane studio album. In a recent interview, they revealed that they are currently collaborating with a number of heavy hitters in the music industry in an effort to make their comeback album a platinum-selling success. They confirmed that they are working with top producers like  James Fauntleroy, Dem Jointz, Rodney “Darkchild” Jerkins and Timbaland. Of course, we’re HustleTweeting about Danity Kane, and you’re more than welcome to join the conversation by following THE HEYMAN HUSTLE on Twitter HERE or write to us directly at hustleoncrave@gmail.com  Hey, have you checked out the Hustle’s Ultra High Quality You Tube Channel, with exclusive videos featuring OUR WORLD EXCLUSIVE WITH MIKE TYSON … BROCK LESNAR’S “HERE COMES THE PAIN” … ICE-T AND COCO’s SEX SECRETS … TEEN SENSATION TAYLOR MOMSEN … UFC BAD BOY NICK DIAZ … THE WALKING RIOT MISSY HYATT if you’re not subscribing, you’re missing something … and by the ways cheapos, it’s FREE! Yes, absolutely 100 percent FREE! What are you waiting for? Check it out HERE!