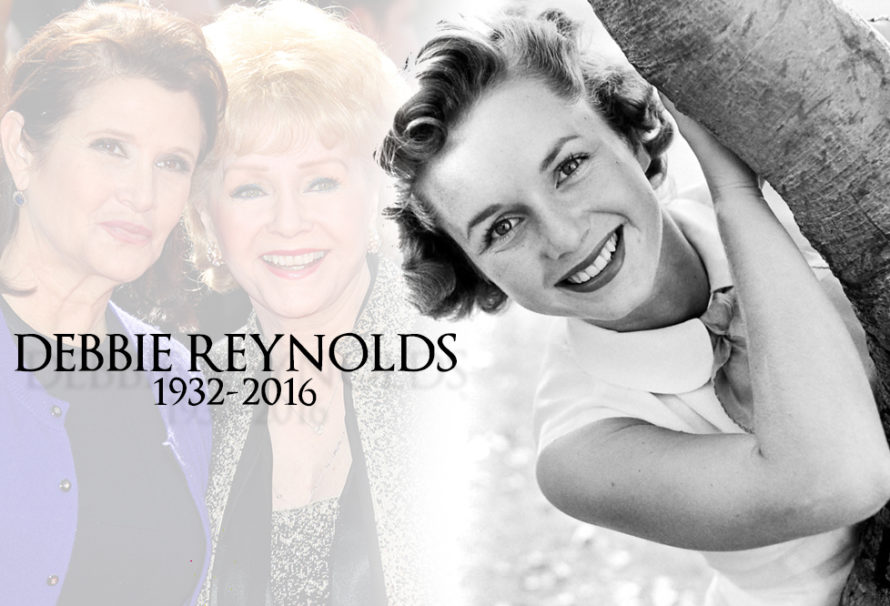 Debbie Reynolds, the Oscar-nominated singer/actress who was the mother of Carrie Fisher (who passed away yesterday, a week after a major cardiac episode on an international flight into LAX) died tonight at Cedars-Sinai Hospital in Los Angeles. She was 84 years old. Her son (Carrie’s brother) Todd Fisher told Variety, “she wanted to be with Carrie.”

According to multiple reports, she was making plans for Carrie’s funeral with Todd at Todd’s Beverly Hills house earlier today when she suffered a suspected stroke.

The vivacious blonde, who had a close but sometimes tempestuous relationship with her daughter, was one of MGM’s principal stars of the 1950s and ’60s in such films as the 1952 classic “Singin’ in the Rain” and 1964’s “The Unsinkable Molly Brown,” for which she received an Oscar nomination as best actress.

Reynolds received the SAG lifetime achievement award in January 2015; in August of that year the Academy of Motion Picture Arts & Sciences voted to present the actress with the Jean Hersholt Humanitarian Award at the Nov. 14 Governors Awards, but she was unable to attend the ceremony due to an “unexpectedly long recovery from a recent surgery.”

Reynolds had a wholesome girl-next-door look which was coupled with a no-nonsense attitude in her roles. They ranged from sweet vehicles like “Tammy” to more serious fare such as “The Rat Race” and “How the West Was Won.” But amid all the success, her private life was at the center of one of the decade’s biggest scandals when then-husband, singer Eddie Fisher, left her for Elizabeth Taylor in 1958.

Reynolds handled it well personally, but got more tabloid coverage when she divorced her second husband, shoe manufacturer Harry Karl, claiming that he had wiped away all of her money with his gambling. The 1987 novel “Postcards From the Edge,” written by Carrie Fisher, and the film adaptation three years later, were regarded as an embellishment on Reynolds’ up-and-down relationship with her actress daughter. In 1997, Reynolds declared personal bankruptcy after the Debbie Reynolds Hotel & Casino closed after years of financial troubles.

She continued to work well into her 80s, via film and TV work, guesting on “The Golden Girls” and “Roseanne” and drawing an Emmy nomination in 2000 for her recurring role on “Will and Grace” as the latter’s entertainer mother. She also did a number of TV movies, including an almost-unrecognizable turn as Liberace’s mother in Steven Soderbergh’s “Behind the Candelabra” for HBO in 2013. She also frequently did voice work for “Kim Possible” and “Family Guy.”

For movie fans, she was always the pert star of movies, TV, nightclubs and Broadway. But to industry people, she was known for her philanthropy, including more than 60 years of working with the organization the Thalians on mental-health care. She was also known for her energetic battles to preserve Hollywood heritage. She bought thousands of pieces when MGM auctioned off its costumes and props, including Marilyn Monroe’s “subway dress” from “The Seven Year Itch,” a Charlie Chaplin bowler hat and a copy of the ruby slippers from “The Wizard of Oz.” Reynolds spent decades trying to get these items showcased in a museum.

Marie Frances Reynolds was born in El Paso, Texas; when she was 8, her carpenter father moved the family to Burbank. At age 16, “Frannie” entered the Miss Burbank Contest, winning in 1948 for her imitation of Betty Hutton singing “My Rockin’ Horse Ran Away.” She was spotted by Warner Bros. talent scout Solly Baiano, who signed her to a $65-a-week contract. Studio head Jack Warner renamed her Debbie — against her wishes, she said.

Reynolds languished at the studio, often having to perform errands such as escorting visitors on tours or addressing envelopes; she appeared in front of the cameras only for a bit part in “June Bride” and then a flashier role as June Haver’s sister in “The Daughter of Rosie O’Grady.”

When the contract lapsed, MGM picked her up at $300 a week. The studio, where she would reside for the next 20 years, first assigned her a role lip-synching Helen Kane’s voice as the original Betty Boop in the musical “Three Little Words.” In romantic musical “Two Weeks With Love,” she used her own voice to put across “Aba Daba Honeymoon,” and she was also given a supporting role in “Mr. Imperium,” starring Lana Turner.

After the studio insisted on her as the romantic lead in “Singin’ in the Rain,” Gene Kelly put her through rigorous dance training, which she admitted she needed. “They took this virgin talent, this little thing, and expected her to hold her own with Gene and with Donald O’Connor, two of the best dancers in the business,” she once told an interviewer. Many years later, “Singin’ in the Rain” was No. 1 on AFI’s 100 Years of Musicals list, and ranked No. 5 in its 2007 list of the greatest American films.

She was 20 when the film opened and her career kicked into high gear. She was next given the female lead in “The Affairs of Dobie Gillis,” co-starring Bobby Van, and segued into another musical comedy, “Give a Girl a Break,” with Marge and Gower Champion.

On loan to RKO, she impressed in the comedy “Susan Slept Here,” with Dick Powell as a screenwriter who must deal with a juvenile delinquent, played by Reynolds, on Christmas Eve. After the film became a hit, Reynolds’ contract was renegotiated. While she was assigned to lackluster musicals such as “Athena” and “Hit the Deck,” the comedies were better, such as “The Tender Trap,” with Frank Sinatra.

And she made a big impression in her dramatic turn as Bette Davis’s daughter in Gore Vidal’s adaptation of Paddy Chayevsky’s “The Catered Affair” (1956).

In 1956, she also starred in RKO’s “Bundle of Joy” (a musical remake of “Bachelor Mother”) opposite crooner Eddie Fisher, whom she had recently married.

“Tammy and the Bachelor,” which featured her million-selling single of the ballad “Tammy,” defined Reynolds and may have limited her to roles as the wholesome all-American type. She went on to play essentially the same part in such films as “The Mating Game” and “The Pleasure of His Company,” with only the occasional tart turn in movies such as “The Rat Race.”

Reynolds had one of the principal roles in 1962’s all-star Cinerama epic “How the West Was Won.” And in the 1960s she remained a star, despite the ho-hum boxoffice performances of “Mary, Mary,” “Goodbye Charlie” and “The Singing Nun.”

When Shirley MacLaine dropped out of 1964’s “The Unsinkable Molly Brown,” Reynolds got her best chance to shine centerstage in a musical comedy about the real-life woman who went from rags to riches and survived the Titanic sinking. (One of the show’s signature songs, “I Ain’t Down Yet,” became an unofficial anthem for the actress as she survived all the turmoil in her life.

She had two of her best roles in “Divorce, American Style,” directed by Bud Yorkin and co-written by Norman Lear; and the 1971 black-comedy suspenser “What’s the Matter With Helen?” with Shelley Winters.. But her movie roles were slowing down and the actress tried series television; “The Debbie Reynolds Show” lasted only one season on NBC from 1969-70.

In 1973, the actress divorced Karl and discovered she was almost $3 million in debt as a result of his gambling losses. She worked it off by appearing 42 weeks a year in nightclubs and Las Vegas and Reno.

She also established the Debbie Reynolds Professional Studios in Burbank. She went to Broadway in a revival of “Irene,” drawing a 1973 Tony nomination for best actress in a musical, which gave daughter Carrie Fisher one of her first roles. After doing “Annie Get Your Gun” on tour, Reynolds returned to Broadway in a short-lived turn in “Woman of the Year.” She toured with Meredith Willson’s stage musical “The Unsinkable Molly Brown” in 1989, 25 years after the film debuted.

Reynolds appeared in a number of successful exercise tapes for older women, “Do It Debbie’s Way,” and co-authored the autobiography “Debbie, My Life” in 1987.

That same year, Reynolds’ private life was again in the spotlight when Carrie Fisher’s novel “Postcards From the Edge” debuted. The work centered on the stormy relationship between an actress and her showbiz-star mother. Though many were convinced this was a roman a clef, Reynolds laughingly pooh-poohed comparisons with the self-centered mom. (MacLaine, the original choice for MGM’s “Molly Brown,” played the mother in the 1970 film adaptation.)

In 1993, the Debbie Reynolds Hotel & Casino opened in Vegas, where she appeared for most weekends in the showroom with Rip Taylor. The next year she opened her Hollywood Movie Museum in Vegas. Reynolds said she got the idea for the hotel as an afterthought, as she was looking for a permanent home for her collection of movie memorabilia.

Reynolds appeared in a number of films in the 1990s, including the title character in the Albert Brooks comedy “Mother.” She also cameo’d as herself in “The Bodyguard”; appeared in Oliver Stone’s “Heaven and Earth”; and played a mother determined to marry off her son whether he’s gay or not in the 1997 “In and Out.” She also appeared in a broadly comic role as the grandmother in Katherine Heigl vehicle “One for the Money” in 2012.

Reynolds also did voicework for many animated film and TV works, starting with the title character in 1973’s “Charlotte’s Web.” and providing voices for the English version of anime “Kiki’s Delivery Service” and for “Rudolph the Red-Nosed Reindeer: The Movie,” “Rugrats in Paris” and “Light of Olympia.”

In 2005 she won the President’s Award at the Costume Designers Guild Awards “for her collection and conservation of classic Hollywood costumes.” However, a deal for placement of the collection fell through, and Reynolds was forced to auction off most of the collection, which was valued at almost $11 million.

In 1955 Reynolds was among the young actors who founded the Thalians, a charitable organization aimed at raising awareness and providing treatment and support for those suffering from mental health issues; Reynolds was elected president of the organization in 1957 and served in that role for more than five decades, and she and actress Ruta Lee alternated as chair of the board. Through Reynolds’ efforts, the Thalians donated millions of dollars to the Mental Health Center at Cedars-Sinai (closed in 2012) and to UCLA’s Operation Mend, which provides medical and psychological services to wounded veterans and their families.

Reynolds was married to third husband Richard Hamlett, a real estate developer, from 1984-96.

We’re HustleTweeting about the death of Debbie Reynolds, and you’re more than welcome to join the conversation by following the Hustle on Twitter HERE or by hitting LIKE on our hyper-interactive Facebook page HERE!