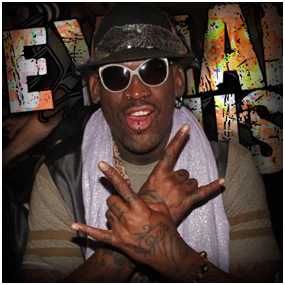 The Controversial NBA Legend Makes an International Vow … Meets The Boogeyman … and Grants Our Own Bob Mulrenin an EXCLUSIVE Photo Session!

Dennis Rodman has been a lightning rod (no pun intended) of controversy for a long time, but his infamy reached a fever pitch when he started visiting North Korea as part of HBO’s Vice basketball diplomacy trip in February 2013. The NBA legend started defending North Korean dictator Kim Jong Un, much to the dismay of the American media, including an admittedly-drunken interview with CNN anchor Chris Cuomo.

“I don’t want people to look at me as the devil or evil person,”  Rodman stated this weekend.  “If I put anyone in harm’s way, I apologize … What makes me so damn bad? What makes me this bad, awful person?”

Now comes word Rodman’s exploits overseas may get to see the light of day in parody of the highest order, as The Hollywood Reporter has posted the news that in late February, 20th Century Fox acquired a comedy pitch for a film called Diplomats, inspired by the Vice trip, with Ride Along’s Tim Story attached as a director. Of course, we’re HustleTweeting about Dennis Rodman (and don’t forget BOOGEYMAN!), and you’re more than welcome to join the conversation (and you have to realize, this is one ridiculously lively conversation) by writing us on twitter HERE or write to us directly at hustleoncrave@gmail.com  Hey, have you checked out the Hustle’s Ultra High Quality You Tube Channel, with exclusive videos featuring OUR WORLD EXCLUSIVE WITH MIKE TYSON … BROCK LESNAR’S “HERE COMES THE PAIN” … ICE-T AND COCO’s SEX SECRETS … MMA BAD BOY NICK DIAZ … the list goes on and on, so if you’re not subscribing, you’re missing something … and by the ways cheapos, it’s FREE! Yes, absolutely 100 percent FREE! What are you waiting for? Check it out HERE!