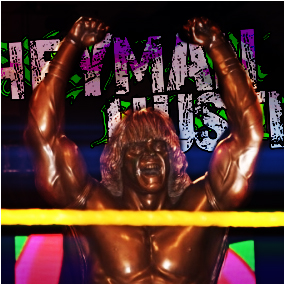 The Late WWE Champion is Immortalized … and we have full coverage!

The spirit of The Ultimate Warrior was celebrated on the very first night of WrestleMania Axxess at the San Jose Convention Center. Surrounded by the passionate and reverent WWE Universe, the WWE Hall of Famer’s wife, Dana Warrior, and his two children, Mattigan and Indiana, came face to face with the life-size bronze statue of the late squared circle legend inside the main ring at Axxess in an emotional reveal of the 6-foot relic by WWE COO Triple H. “The legacy that he leaves behind is something I am so deeply proud of,” said the humbled wife of the WWE Hall of Famer. “I am also so proud of what he did here with all of you.”  She added, “The Warrior fans really are the ultimate, and I want to thank you; thank you for taking the girls and I in, and loving us too because it has meant the world.”

Concluding the ceremonious unveiling, the entire Warrior family stepped toward the edge of the ring and shook the ring ropes much like their beloved father and husband became famous for during his career. The Ultimate Warrior passed away last April, just days after his return to WWE during WrestleMania Weekend. One year later, with “Thank you, Warrior!” chants, WWE fans warmly embraced the family of the iconic former WWE Champion. His statue, which has taken a month to complete, captures his unmistakable likeness and unequaled essence.

Of course, we’re HustleTweeting about The Ultimate Warrior and you’re more than welcome to join the conversation following The Heyman Hustle on Twitter HERE! You can also post your thoughts on our Facebook page HERE!  If you feel compelled to write us, please do so at HustleOnCrave (at) Gmail.com

CLICK ON THE PICS BELOW TO SEE DIGITAL CHARLIE’S ENTIRE EXCLUSIVE PHOTO GALLERY OF THE UNVEILING OF THE ULTIMATE WARRIOR’S STATUE!

BEHIND THE SCENES DURING WRESTLEMANIA WEEK!