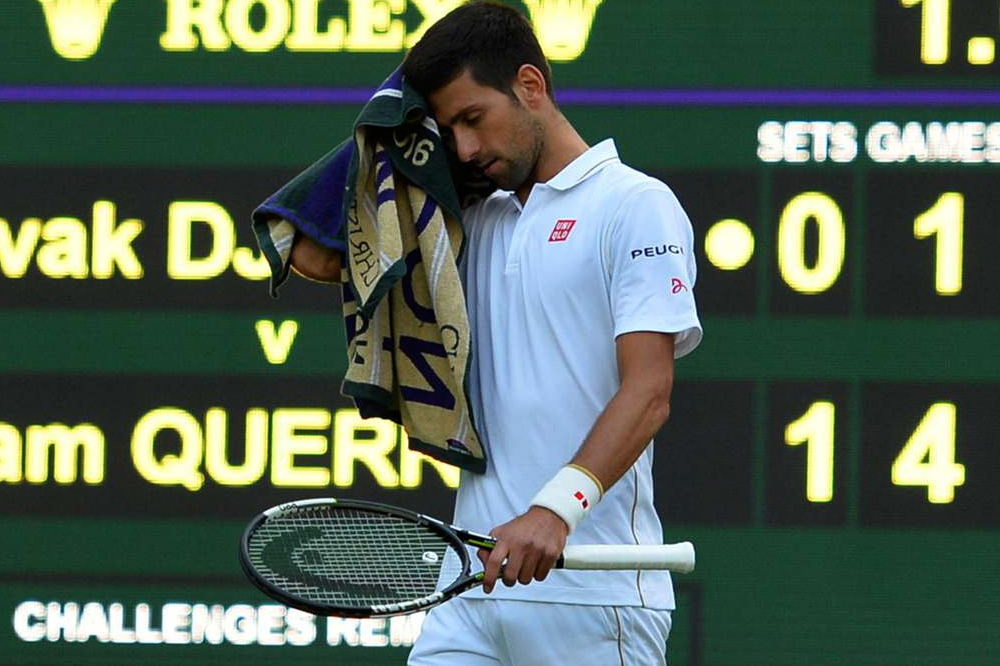 Shocker in the UK!

The best tennis player in the world has been upset by the number 28 seed, as Novak Djokovic is out of Wimbledon after a shocking defeat at the hands of American Sam Querrey. The upset ends Djokovic’s hopes of a calendar-year Grand Slam.

Querrey, seeded 28th, completed his third-round win after rain had suspended play on Friday evening. This was Djokovic’s first loss at a major tournament since the 2015 French Open final.

Britain’s Andy Murray, seeded second, made it into round four with a 6-3 7-5 6-2 win over Australia’s John Millman.

Djokovic had hoped to win his third straight Wimbledon title and secure the third leg of a calendar Slam.

The 29-year-old has already won the Australian and French Opens this year, and was also trying to become only the second player in history to win five successive major titles.

Asked whether he was 100% healthy, Djokovic said: “Not really. But it’s not the place and time to talk about it. The opponent was playing on a very high level and he deserved to win.

Querrey, 28, could barely find the words, stating, “It’s incredible, especially to do it here at Wimbledon … I’m so ecstatic, so happy. I played the break points well and every time he had a break point I was able to come up with a big serve … He came out and got the first four games, fortunately for me we had another rain delay and I got to regroup. I’m just taking it one round at a time, I’m not even sure who I’m playing next.”

Querrey. a giant on the court as he stands six feet six inches tall, has a huge serve, and grass-court pedigree as a former Queen’s Club champion, but there was no reason to think he might be the man to finally derail Djokovic, the world’s most dominant player for several years now

Djokovic had looked strangely out of sorts in the first chapter of the contest but he took advantage of an edgy Querrey to build a quick 4-0 lead on Saturday’s resumption.

The third set was duly taken either side of another rain delay but try as he might, the 12-time Grand Slam champion could not break away in the fourth.

The pair shared 16 break points before Djokovic finally moved ahead with a forehand for 5-4 – only to give the break straight back with a poor attempt at a drop volley.

When the rain returned just after Querrey had held for a 6-5 lead, it left Djokovic heading for the locker room knowing he would have to serve to stay in the match on the resumption.

A little over an hour later, the top seed played a nerveless service game to force the tie-break but once again he could not find his usual clinical edge.

A 3-1 lead disappeared and despite Djokovic saving a first match point with an ace, it was Querrey who was leaping in the air in celebration when the Serb pulled a forehand wide on the second.

The entire tennis world is in shock over Djokovic’s loss, as now it’ll be someone unexpected (no matter who it is) that ends up as this year’s champion at Wimbledon. Of course, we’re HustleTweeting about The Elimination of Djokovic, and you’re more than welcome to join the conversation on the Hustle Twitter HERE or on our hyper-interactive Facebook page HERE!