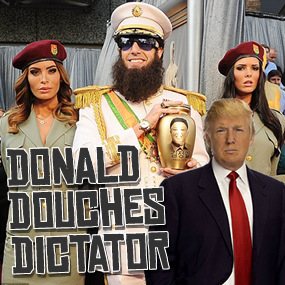 The Donald is having a busy day.

The NY-based real estate mogul added to his global portfolio as he confirmed he was paying $150 million for the 50-year-old Doral Hotel and Country Club, a 700-room resort on the northwest outskirts of Miami with four championship golf courses, including the Blue Monster.

The course, which has been home to a PGA Tour event every year since its opening, will host the Cadillac World Golf Championship next week. In addition to the purchase price for the Doral Country Club, which covers almost 800 acres, Trump said he plans a “multimillion-dollar renovation” of the resort, which will include enhancements of the Blue Monster under golf course architect Gil Hanse.

“When Doral first opened, it was considered the best resort in the world,” Trump said in a statement.

“The combination of the property’s incredible location in the heart of Miami and our very significant investment in upgrading the resort will enable us to return Doral to its former glory if not surpass it. When completed, Doral will be the finest resort and golf club in the country,” he said.

When Trump first emerged as a potential buyer of the resort, Florida’s legislature was preparing to debate a bill that would have ushered in the largest gambling expansion in state history, with three mega-resort casinos in the Miami and Fort Lauderdale area. Faced with probable defeat, the bill was withdrawn from consideration earlier this month. But it is widely expected to be revisited soon, and Trump could wind up owning a prized location as a casino operator.

“It would be impossible for a developer today to replicate a property of this size in Miami at any cost,” he said. And with that, The Donald proved to be a very savvy businessman.

Then he proved he’s also a douche.

Cohen, as General Aladeen from his new film The Dictator, tipped an urn containing ‘the ashes of Kim Jong II’ over Ryan Seacrest at the Oscars on Sunday night. Seacrest didn’t seem too amused. Most other people, including we here at the Hustle, laughed their asses off.

“Sacha Baron Cohen thought he was being cute and funny when he threw ashes on Ryan Seacrest,” The Donald pontificates in his video commentary, ” I know Ryan Seacrest and he’s a great guy and you can see he was visibly upset, it’s a disgrace. And the security that was standing to the right. He ought to be fired immediately.”

Trump continued to bellow, “Believe me if that had happened to someone with real security, Sacha Baron Cohen would not be in good shape right now. He would be in hospital, he would have been punched in the face so many times, he wouldn’t have known what happened.”

Deep into his tirade, The Donald amazingly stated  “I only wish that Ryan took a swing at him!”

Of course, we’re HustleTweeting about The Dictator vs The Donald, and you’re more than welcome to join the conversation by following THE HEYMAN HUSTLE on Twitter HERE or write to us directly at hustleoncrave@gmail.com  Hey, have you checked out the Hustle’s Ultra High Quality You Tube Channel, with  exclusive videos featuring BROCK LESNAR’S “HERE COMES THE PAIN”  … ICE-T AND COCO’s SEX SECRETS … THE ULTIMATE WELTERWEIGHT BAD ASS NICK DIAZ … CONTROVERSIAL TEEN SENSATION TAYLOR MOMSEN … LEGENDARY MMA PIONEER FRANK SHAMROCK … THE WALKING RIOT MISSY HYATT … if you’re not subscribing, you’re missing something … and by the ways cheapos, it’s FREE! Yes, absolutely 100 percent FREE! What are you waiting for? Check it out HERE!