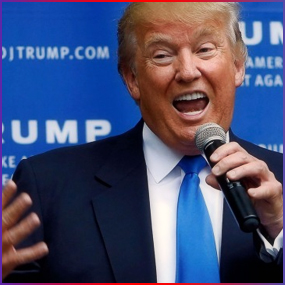 He’s not talking about immigration this time!

Donald Trump ignited a firestorm earlier today when he criticized Sen. John McCain‘s military record at a conservative forum, saying the party’s 2008 nominee was a “war hero because he was captured. I like people who weren’t captured.”

In case you’re wondering where the comments stems from, you should be aware that Trump and McCain, the US Senator from Arizona, engaged in a round or two earlier this week. McCain said Trump’s controversial comments about immigrants and had “fired up the crazies” at a rally in Phoenix. Trump retorted that McCain, who ran for President and lost to Barack Obama in 2008 was “a dummy” who graduated at the bottom of his class at the U.S. Naval Academy.

McCain’s war record was a cornerstone of his 2008 bid for president. A Navy pilot during the Vietnam War, he was captured after his plane was shot down. He was held for more than five years as a prisoner of war. Speaking at a conference of religious conservatives, Trump was pressed on his description of McCain as “a dummy.” The moderator, Republican pollster Frank Luntz, described McCain as “a war hero.”

“He’s not a war hero,” Trump said. “He is a war hero because he was captured. I like people who weren’t captured.”

Of course, we’re HustleTweeting about Donald Trump, and you’re more than welcome to join the conversation by following the Hustle on Twitter HERE or write to us directly at hustleoncrave@gmail.com Hey, have you checked out the Hustle’s Ultra High Quality You Tube Channel, with exclusive videos featuring the #HUSTLEBOOTYTEMPTATS SUPERMODEL OF THE YEAR … OUR WORLD EXCLUSIVE WITH MIKE TYSON … BROCK LESNAR’S “HERE COMES THE PAIN” … ICE-T AND COCO’s SEX SECRETS … MMA BAD BOY NICK DIAZ … the list goes on and on, so if you’re not subscribing, you’re missing something … and by the ways cheapos, it’s FREE! Yes, absolutely 100 percent FREE! What are you waiting for? Check it out HERE