Donald Trump Weighs In on Kanye West For President 2020 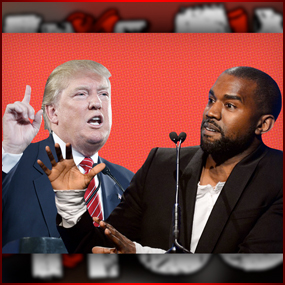 So What Does The Republican Front Runner Think of Yeezy’s Bid For POTUS?

When Kanye West announced at the MTV Video Music Awards that he intended to run for President of the United States in 2020, we can’t really tell how many people took him seriously. One person who did? The Donald himself! The current #1-in-the-polls Republican candidate was interviewed by Rolling Stone and commented on the potential of Kanye making a move on the presidency in 2020 by saying,  “He’s said very nice things about me in the past… extremely positive things …  I was actually watching, I saw him [announce his candidacy on the VMAs], and I said, That’s very interesting. I wonder who gave him that idea?“

“He’s actually a different kind of person than people think. He’s a nice guy,” Trump said of Kanye. “I hope to run against him someday.”

Of course, we’re HustleTweeting about Donald Trump and Kanye West, and you’re more than welcome to join the conversation by following the Hustle on Twitter HERE or write to us directly at hustleoncrave@gmail.com Hey, have you checked out the Hustle’s Ultra High Quality You Tube Channel, with exclusive videos featuring the #HUSTLEBOOTYTEMPTATS SUPERMODEL OF THE YEAR … OUR WORLD EXCLUSIVE WITH MIKE TYSON … BROCK LESNAR’S “HERE COMES THE PAIN” … ICE-T AND COCO’s SEX SECRETS … MMA BAD BOY NICK DIAZ … the list goes on and on, so if you’re not subscribing, you’re missing something … and by the ways cheapos, it’s FREE! Yes, absolutely 100 percent FREE! What are you waiting for? Check it out HERE

CHECK OUT THE DONALD TALKING ABOUT KANYE!