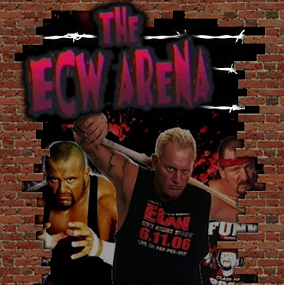 The Asylum Arena, formerly known as The ECW Arena, has always been called the wrestling equivalent of the place punk music was born, CBGB’s. The Arena is about to suffer the same demise that befell CBGB’s. New ownership has taken over and is about to start a huge renovation that will forever change the venue. As fate would have it, EVOLVE will hold the last pro wrestling show there this Saturday night.

For those who don’t know, I happen to be head creative and promoter for EVOLVE. I first walked into The Arena in 1993 selling the ECW Action Wire and Sabu fan clubs. This Saturday night also marks ten years I’ve been booking shows. So yeah, this isn’t just any ordinary show.

The beginning of February will see all the interior walls torn down and every inch of the building redone. To my understanding, the grungy, intimate old bingo hall will be transformed into a pristine 3000 seat concert hall. The anything goes, wrestling friendly days will be over. The general public will call this an improvement. To those denizens of The Arena it will be an end of an era.

To me personally the building has been the site of so many memories and nights that forever changed my life. I look up at the seating between the bathrooms and remember all the times I watched Paul Heyman book. That was my classroom. I look below it and think of one of the first times I hung out with my future wife and mother of my son and can still remember the dress she was wearing. I look over at where the bleachers were and think of a friendship that was born there almost 15 years ago. I can walk that building from front-to-back and have a flood of memories.

This Saturday night we have a responsibility to make sure the world famous building goes out the right way. We need to give The Arena one final great show. We will supply more unforgettable memories. The evening will feature an action-packed, high-octane, intense EVOLVE card. The final segment will be something different. We are calling it A Tribute To The Arena. It will be hosted by the voice of ECW Joey Styles. There’s no one better to host the finale. This is also a very rare appearance by Styles. In a once-in-a-lifetime opportunity before the show, you’ll be able to get your picture taken in the middle of the ring in the former ECW Arena with Styles, who will be posing like he is interviewing you. We also have New Jack confirmed and in ECW tradition there will be other extreme surprises. Anything can and will happen in this final segment. That’s the only way The Arena can go out.

One of the legacies of The Arena is that it is the place where new stars are made and the new generation is born. Those who were there will never forget the debuts of Eddie Guerrero, Rey Misterio, Rob Van Dam, Sabu and so many other legendary names. The EVOLVE card this Saturday will carry on that tradition. The main event has two of today’s new stars, Johnny Gargano  and Ricochet, battling over The Open The Freedom Gate Title. Gargano and Ricochet aren’t upcomers, they have matured into major league players. Just watch the free videos linked to their names to see for yourself. Please go to www.DGUSA.tv for full card info.

We hope you will join us for a very special day on January 14th. Combat Zone Wrestling, which has held more shows at The Arena than any other promotion, will present a stacked card in the afternoon. Then at 8pm EVOLVE will close the building out in style with a night you’ll never forget. This is it. If you ever stepped foot in the building at the corner of Swanson & Ritner you need to be there this Saturday. We will deliver that one final memory.