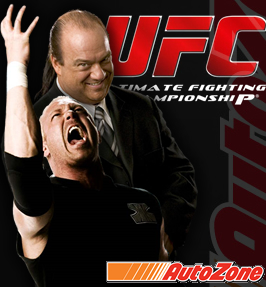 Say what you want about Tito Ortiz, the UFC Legend was keeping the mood backstage very light and loose at the UFC 106 weigh-ins yesterday afternoon… EVEN CLOWNING AROUND BEHIND FORREST GRIFFIN’S BACK!

Is this really The Huntington Beach Bad Boy speaking?

Even with a nasty looking black eye, Tito was the life of the party backstage at the weigh-ins. THE HEYMAN HUSTLE was the only media outlet with backstage credentials (ok, we snuck in, but it makes us seem so "established" by saying we got the credentials … but hey, no one threw us out!), and The Hustle’s Hollywood Charlie observed a complete 180 degree change in Ortiz since his controversial heyday in UFC.

"Griffin was his usual fun-self," Hollywood Charlie reports, "but Tito was the one having the best time. Forrest just loves the whole fight game, he loves participating. He cut his honeymoon short just for the chance to get back into the Octagon after that beating from Anderson Silva."

When Hollywood Charlie asked Tito for a prediction for the fight, he turned it into a commercial for Punishment Athletics!

"Ortiz who was a prankster backstage," Hollywood Charlie stated, "he was cracking Forrest up, constantly telling Forrest Now Take Things Seriously, Forrest … We’re Beating Each Other Up Tomorrow Night  and also saying things like Don’t Hate Me Yet, Forrest. I Haven’t Knocked You Out Yet! The mood was definitely dictated by Ortiz. Whether he’s a changed man, or he’s getting inside Forrest’s head remains to be seen."

Stay with us as THE HEYMAN HUSTLE continues its exclusive and extensive coverage of UFC 106.