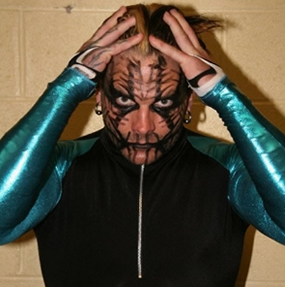 Jeffrey Nero Hardy, better known simply as Jeff Hardy, is one of the most popular pro wrestlers on the TNA Wrestling roster at the moment. The high flying native of Cameron, North Carolina ranks right up with TNA World Champion Rob Van Dam, "Mr. Asshole" Ken Anderson, and The Hulkster himself as the most talked about performer on TNA iMPACT, which airs every Thursday night on SpikeTV.  THE HEYMAN HUSTLE’s ace photographer Bob Mulrenin captured these images of Hardy at a show in the Northeast, where Hardy wrestled as part of a big convention weekend.

As always, we’re HustleTweeting about this story on Jeff Hardy, and you are more than welcome to join the conversation! Follow THE HEYMAN HUSTLE on Twitter, and let us know what you are thinking! We’re waiting for you HERE

CLICK ON THE PHOTOS TO SEE THE ENTIRE GALLERY
OF THE CHARISMATIC ENIGMA JEFF HARDY!

LIVE FROM THE CENTER OF THE UNIVERSE AKA NEW YORK CITY
IT’S THE HOLLYWOOD CHARLIE MEDIA WATCH. NOW, WHY A DUDE
NAMED HOLLYWOOD CHARLIE IS IN CHARGE OF A MEDIA WATCH
THAT IS POSTED FROM NYC, WE HAVE NO IDEA, BUT JUST ROLL
WITH THE PUNCHES, OK? SO, JUST PICK A PIC … AND CLICK!