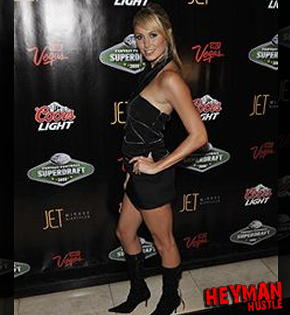 to her wild Vegas party at The Mirage Hotel and Casino’s Jet Nightclub last night!

The leggy former WWE Diva and Baltimore Ravens cheerleader hosted the Kickoff Party for “SuperDraft Weekend,” which takes place this weekend in Vegas (so if you ain’t here by now, you’re missing out on the action) from August 27 through the 30th. There are a number of events, and parties featuring Shannon Elizabeth and Molly Simms, but it was Stacy who was chosen to host the Kickoff Party.

Stacy, who makes a living attending events and hosting parties, hit the red carpet at 11:30 pm, and then proceeded to go inside the Jet nightclub, where THE HEYMAN HUSTLE was granted exclusive access to the party.

We will have much more throughout the weekend from SuperDraft, including exclusive photos from the Fantasy Football Cheerleaders Private Party, and some awesome video of Stacy’s appearance.