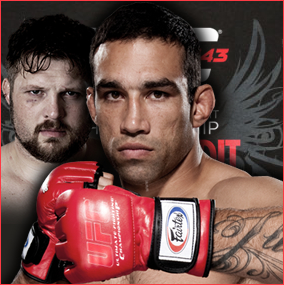 It will be the Brazilian Jui Jitsu master who shocked the world by FORCING FEDOR EMELIANENKO TO TAP OUT against the hamburger eating everyman who won Season 10 of “The Ultimate Fighter” as Fabricio Werdum has confirmed his return to the Octagon against Roy “Big Country” Nelson at UFC 143: Diaz vs Condit.

According to an excellent article posted by Damon Martin of MMA WEEKLY, Werdum made the announcement about his return on Tuesday at his gym in California, where he answered fan questions and talked about his new deal via Ustream.
Werdum also confirmed that he has signed a new 4-fight deal with the UFC that kicks off February 4 in Las Vegas when he steps into the Octagon against Nelson. The bout between Werdum and Nelson will definitely be on the main card for the show, but current rumors have placed the fight as a co-main event for the show. The headliner will feature an interim Welterweight Title Fight between Nick Diaz and Carlos Condit.

Damon Martin is always interactive with his readers, and you can chat with the MMA reporter via Twitter HERE

Of course, we’re HustleTweeting about Werdum vs Nelson, and you’re more than welcome to join the conversation by HustleTweet even more about Amy, and we want you to join the conversation by following THE HEYMAN HUSTLE on Twitter HERE or write to us directly at hustleoncrave@gmail.com  Hey, have you checked out the Hustle’s Ultra High Quality You Tube Channel, with  exclusive videos featuring BROCK LESNAR’S “HERE COMES THE PAIN”  … ICE-T AND COCO’s SEX SECRETS … THE ULTIMATE WELTERWEIGHT BAD ASS NICK DIAZ … CONTROVERSIAL TEEN SENSATION TAYLOR MOMSEN … LEGENDARY MMA PIONEER FRANK SHAMROCK … THE WALKING RIOT MISSY HYATT … if you’re not subscribing, you’re missing something … and by the ways cheapos, it’s FREE! Yes, absolutely 100 percent FREE! What are you waiting for? Check it out HERE!