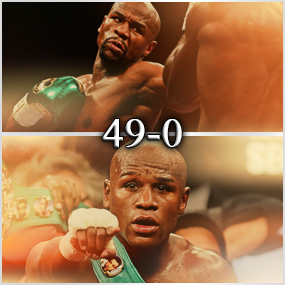 The Pound-For-Pound King Has Abdicated His Throne!

Floyd “Money” Mayweather has retired from professional boxing. The undefeated box office champion defeated Andre Berto and then confirmed he is sticking by his decision to hang up the gloves. The thirty eight year old, who won the fight 120-108, 118-110, 117-111 stated  “You got to know when to hang it up, and it’s time for me to hang it up. I’m not going to be doing this when I’m 40 years old … there’s nothing else for me to do in the sport of boxing. I made great investments, I’m financially stable, well off. I had a great career. My record speaks for itself.”

The fight against Berto was Mayweather’s last in his six-fight contract with Showtime/CBS which he signed in 2013. Mayweather retires with a Rocky Marciano-esque 49-0, including his victory earlier this year over Manny Pacquiao.  Asked what matching Marciano’s record, the best in boxing history for a fighter who retired as a champion, meant to him, Mayweather said, “That means it’s part of boxing history. Records are made to be broken. Hopefully, we can find the next Floyd Mayweather who can break the record. Right now, I only want to spend time with my family.

A recent media report pointed out that if Mayweather’s retirement holds (and virtually everybody is a skeptic except for Mayweather and those on his team), he will have finished his career by facing his 16th consecutive (and 24th overall) current or former world titleholder and by taking part in his 26th world title fight.

Mayweather, who won world titles in five weight classes from junior lightweight to junior middleweight, commented, “I’m leaving the sport with all my faculties,” he said. “I’m still smart. I’m still sharp. I’ve accomplished everything …  I am the best.”

Of course, we’re HustleTweeting about Floyd Mayweather, and you’re more than welcome to join the conversation by following the Hustle on Twitter HERE or write to us directly at hustleoncrave@gmail.com Hey, have you checked out the Hustle’s Ultra High Quality You Tube Channel, with exclusive videos featuring the #HUSTLEBOOTYTEMPTATS SUPERMODEL OF THE YEAR … OUR WORLD EXCLUSIVE WITH MIKE TYSON … BROCK LESNAR’S “HERE COMES THE PAIN” … ICE-T AND COCO’s SEX SECRETS … MMA BAD BOY NICK DIAZ … the list goes on and on, so if you’re not subscribing, you’re missing something … and by the ways cheapos, it’s FREE! Yes, absolutely 100 percent FREE! What are you waiting for? Check it out HERE