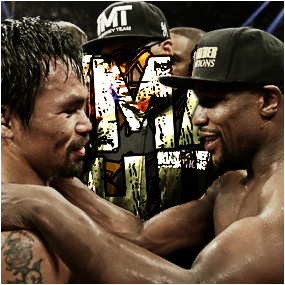 Every single solitary item in this story is “WTF” worthy!

When Floyd Mayweather defeated Manny Pacquiao in what was undoubtedly the biggest money boxing match in history, “Money” was quick to announce the one fight he has left on his Showtime contract, scheduled for September, will be his last. A retirement match.

And now, the end is not so near.

With all the talk of Pacquiao having a torn rotator cuff requiring surgery, or whether it’s simply because there’s a few bucks left on the table (although with so many complaints about how boring the match was, we can’t see there being “money left on the table”), now there’s talk of Mayweather extending his career to a 50th fight, and that fight would be a rematch with Pacquiao.

Willing to, and negotiating the reality of the fight are two different things. Pacquiao being out for nine months to a year with this surgery is another factor. And who puts up the money is another. And that’s just the start of it. But Floyd’s on-record. He’s willing to do it, or so he says.

Of course, we’re HustleTweeting about Floyd Mayweather vs Manny Pacquiao, and you’re more than welcome to join the conversation by following The Heyman Hustle on Twitter HERE! You can also post your thoughts on our Facebook page HERE!  If you feel compelled to write us, please do so at HustleOnCrave (at) Gmail.com