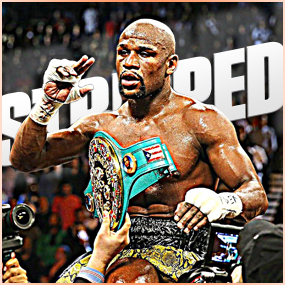 The WBO continues to make moves that de-values its own championships!

Boxing’s number one reporter, ESPN’s DAN RAFAEL HAS REPORTED THE WBO IS POISED TO STRIP FLOYD “MONEY” MAYWEATHER OF THE ORGANIZATION’S WELTERWEIGHT CHAMPIONSHIP which he won from Manny Pacquiao on May 2nd.  Mayweather originally planned to not accept the title as part of his post-fight pledge to vacate all his titles so younger boxers could have a chance at the championships. But when he did accept the WBO championship, he was required to pay the sanctioning body a $200,000 fee by Friday, a deadline he did not reach. If anyone reading can tell us why Floyd should care at all, with only one fight left before his self-imposed retirement, please explain that to us.

In order to keep the Welterweight Championship, Mayweather would have to forfeit his WBO Junior Middleweight Championship since the organization does not allow boxers to hold championships in multiple weight classes, although it has made exceptions for Mayweather in the past. If the WBO follows through on its threats to strip Mayweather of the belt, it will be given to Timothy Bradley Jr.who won the organization’s interim 147-pound title in a fight with Jessie Vargas on June 27th.

Mayweather currently holds the Welterweight and Super Welterweight titles for both the WBA and WBC in addition to the WBO belt. So we ask you this again … is there a single reason on earth Mayweather should care one iota? Of course, we’re HustleTweeting about Floyd “Money” Mayweather, and you’re more than welcome to join the conversation by following The Heyman Hustle on Twitter HERE! You can also post your thoughts on our Facebook page HERE!  If you feel compelled to write us, please do so at HustleOnCrave (at) Gmail.com