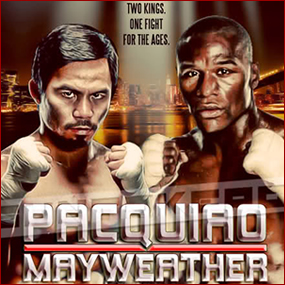 Everyone will have the same information posted by the time you’re done reading this sub-headline. But THE HEYMAN HUSTLE has the “how” and the “why” of the biggest money boxing match in history!

Floyd “Money” Mayweather (Junior) and Manny Pacquiao, welterweights at the end of their respective careers and the two biggest money attractions in the sport of professional boxing, have agreed to terms for a match on May 2nd at  MGM Grand Garden Arena in Las Vegas.

The deal was completed on Friday after months of negotiations which finally kicked into high gear following Pacquiao’s victory against Chris Algieri on Novembe 22nd. By the time Mayweather and Pacquiao “bumped into each other by coincidence” at the Miami Heat game on January 27, both were just toying with the media and the public in order to build anticipation for the completion of the agreement.

“I promised the fans we would get this done, and we did,” Mayweather wrote on the social media platform Shots where he officially broke the news.

Pacquiao said in a statement: “I am very happy that Floyd Mayweather and I can give the fans the fight they have wanted for so many years. They have waited long enough, and they deserve it.”

CLICK HERE TO READ ABOUT THE TRIALS AND TRIBULATIONS OF MANNY PACQUIAO!

Mayweather, who turns 38 on Tuesday, is 47-0, with 26 knockouts. Pacquiao, 36, is 57-5-2, with 38 knockouts. The fight will be broadcast as part of a joint venture between Showtime Sports, which holds the rights to Mayweather, and HBO Sports, which has Pacquiao’s rights. It will be distributed on pay per view at a fee that has yet to be determined. Details of the production for Mayweather vs Pacquiao, such as who the announcers will be, were not made available to the media yet, if the final determinations have been decided yet.

“This deal is the product of a lot of hard work,” said Stephen Espinoza, the Executive Vice President and General Manager at Showtime Sports, noting there were “blood, sweat, and tears along the way.”

Showtime and HBO teamed up for the 2002 Heavyweight Championship match between Lennox Lewis and Mike Tyson. Ken Hershman, the President of HBO, said that the Lewis-Tyson deal was instrumental in the negotiations. “I think it was a real good road map for all of us,” Hershman said. “It showed that this could be done successfully.”

Espinoza singled out the legendary Leslie ‘Les” Moonves, Chief Executive of CBS Corporation whose holdings include Showtime, as being particularly instrumental in the talks.

Arum also stated his opinion that Moonves and the HBO Chairman Richard Plepler were “the adults in the room.”

The fight is expected to be the highest-grossing fight ever. Multiple reports estimated that the purse could exceed $200 million and that there would be a 60/40 split in Mayweather’s favor. “This will be the biggest event in the history of the sport,” said Mayweather. “Manny is going to try to do what 47 before him failed to do, but he won’t be successful. He will be number 48.”

Early in the negotiations, representatives for other sites lobbied to stage the match. One was AT&T Stadium in Arlington, Tex., which could have accommodated more than 100,000 fans. But the MGM Grand has served as something of a home to Mayweather and Pacquiao in recent years, as Mayweather’s last 10 fights have been there, as have five of Pacquiao’s last seven … and it quickly became clear that the 16,800-seat arena was the only serious contender for the fight.

Arum said that Pacquiao, in his second term as a congressman in the Philippines, planned to leave boxing by the end of 2016 and wanted this to secure his standing as one of the greatest ever. “He needed to have this fight to cement his legacy in the sport,” Arum said. “This is a fight he believes he’s going to win.”

“Everyone involved, including Floyd Mayweather and Manny Pacquiao, knows this fight simply had to happen,” said Espinoza.

So how did the deal finally happen?

Well, it’s been brewing a long long time. Ever since the beginning of the careers of both men, who now face retirement.

Mayweather has won world titles in five weight classes and is reported to be the highest paid athlete in the world. Pacquiao, a left handed fighter, is the only boxer in history to win world titles in eight weight divisions and is such a cultureal icon in his native Philippines, he is a member of Congress there. Both Mayweather and Pacquiao were with HBO when their representatives began to negotiate a superfight between the two of them at the end of 2009 and into early 2010.

All of the deal points were agreed to for a March 13, 2010 fight, even ia 50-50 financial split, except for the method of drug testing in the lead-up to the fight. Mayweather demanded random blood and urine testing and Pacquiao declined to accept the specific protocol Mayweather wanted. In hindsight, Mayweather was way ahead of the sports world.

The deal fell apart and both moved on to other opponents. Pacquiao also sued Mayweather for defamation for accusing him of using performance enhancing drugs; the case was eventually settled out of court, but the bad feelings remained on both sides.

So they cleaned out their divisions. Sometimes, they had common opponents, like De La Hoya, Miguel Cotto, Ricky Hatton, Juan Miguel Marquez and Shane Mosley.

Since the initial negotiation broke down in early 2010 there were other attempts to make the super fight, including in 2010 when then-HBO Sports president Ross Greenburg served as a go-between in the negotiations between Arum of Top Rank and Mayweather adviser Al Haymon.

Those negotiations also failed and Leonard Ellerbe, the CEO of Mayweather Promotions, denied a negotiation had even taken place despite Greenburg and Arum saying they had.

In early 2012, another attempt was made to put the fight together when Pacquiao adviser Michael Koncz, who was visiting Mayweather in Las Vegas, put him on the phone with Pacquiao. Mayweather offered Pacquiao a $40 million flat fee for the fight. Pacquiao, seeking to share in the overall revenue,  declined.

The fight looked dead in recent years. Pacquiao suffered back-to-back losses in 2012, a massively controversial split decision to Timothy Bradley Jr. and a sixth-round knockout loss to rival Juan Miguel Marquez in their fourth fight, and then took off 11 months. The Marquez kayo was so bad, so embarrassing, everyone thought the idea of the super fight was simply off.

While Pacquiao was out of action, Mayweather jumped from HBO to Showtime for a six-fight contract, seemingly making the prospect of a deal even more remote.

Pacquiao returned in late 2013 and has won three fights in a row, a near-shutout of Brandon Rios followed by his regaining his Welterweight Title by soundly outpointing Bradley in their rematch last April. In November, Pacquiao fought Chris Algieri, whom he knocked down six times in a virtual shutout decision.

Mayweather, meanwhile, fought four of the fights of his Showtime deal, wins against Robert Guerrero, Carmelo Alvarez and two against Marcos Maidana.

When Mayweather outpointed Maidana in their September rematch, he simply stated at the post fight  news conference, “If the Pacquiao fight presents itself, let’s make it happen.”

Two months later, Pacquiao, during the lead-up to the fight with Algieri, called for a Mayweather super fight and continued to do so after he started throwing insults.

Pacquiao even filmed a television commercial for athletic apparel retailer Foot Locker in which he mocked the fact that Mayweather had yet to agree to fight him. In the spot, Pacquiao overheard two boxers in the gym working on the heavy bag while discussing their excitement about a Foot Locker promotion.

Pacquiao, working mitts in the ring, walked over to the ropes and shouted at the boxers: “Wait, wait! So the thing the people wanted is finally happening?” One boxers answers, “Yeah,” and shrugged. Pacquiao broke out into an epic celebration in the ring, shouting, “Yes!!! He’s going to fight me!”

It’s been a long long long long long long long journey. On May 2nd, either Floyd cements his legacy as the best pound for pound fightter in history, or Pacquiao breaks the streak. Of course, we’re HustleTweeting about Floyd Mayweather vs Manny Pacquaio, and you’re more than welcome to join the conversation by following the Hustle on Twitter HERE or write to us directly at hustleoncrave@gmail.com Hey, have you checked out the Hustle’s Ultra High Quality You Tube Channel, with exclusive videos featuring OUR WORLD EXCLUSIVE WITH MIKE TYSON … BROCK LESNAR’S “HERE COMES THE PAIN” … ICE-T AND COCO’s SEX SECRETS … MMA BAD BOY NICK DIAZ … the list goes on and on, so if you’re not subscribing, you’re missing something … and by the ways cheapos, it’s FREE! Yes, absolutely 100 percent FREE! What are you waiting for? Check it out HERE!