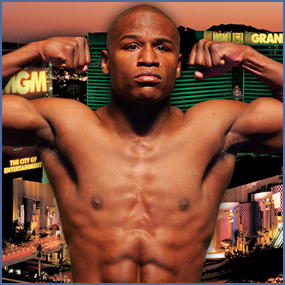 Floyd Mayweather has chosen the MGM Grand Garden Arena as the site for his May 3rd pay per view showdown with Marcos Maidana. Although there was strong competition from the Barclays Center in Brooklyn, New York  to host Mayweather’s fight with fellow Welterweight Champion Maidana, the MGM Grand in Las Vegas won out and will host the latest Showtime extravaganza featuring boxing’s biggest gate attraction.

Golden Boy Promotions, which has promoted all of Mayweather’s fights since 2007, has an exclusive deal with the Barclays Center to put on regular boxing cards there and the arena wanted Mayweather. However, the MGM Grand, which Mayweather says stands for “Mayweather Gets Money,” since it has been site of his massive paydays, won out in the end. Mayweather will be fighting at the MGM Grand for the ninth consecutive time dating to his record-breaking Junior Middleweight Title fight with Oscar De La Hoya in 2007, which sold an all-time pay-per-view record 2.4 million units. Mayweather’s fight against Maidana will also be Floyd’s 11th fight in a row in Las Vegas, including bouts at Mandalay Bay and the Thomas & Mack Center, and his 12th overall at the MGM Grand.

Since there is no state income tax in Nevada, and there is in New York, Mayweather will save millions in taxes, although it is unclear if part of the Barclays Center proposal was a guarantee that would have offset Mayweather’s tax liability. Fighting at the MGM has just become too big a business for Floyd “Money” Mayweather.

Of course, we’re HustleTweeting about Floyd Mayweather, and you’re more than welcome to join the conversation HERE or write to us directly at hustleoncrave@gmail.com  Hey, have you checked out the Hustle’s Ultra High Quality You Tube Channel, with exclusive videos featuring OUR WORLD EXCLUSIVE WITH MIKE TYSON … BROCK LESNAR’S “HERE COMES THE PAIN” … ICE-T AND COCO’s SEX SECRETS … MMA BAD BOY NICK DIAZ … the list goes on and on, so if you’re not subscribing, you’re missing something … and by the ways cheapos, it’s FREE! Yes, absolutely 100 percent FREE! What are you waiting for? Check it out HERE!