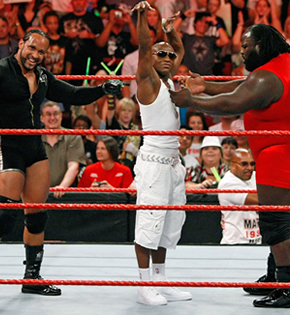 Floyd “Money” Mayweather (aka Floyd Jr) appeared (well, late, but at least he was there) on WWE Monday Night Raw, and the Pound-For-Pound King of Boxing was used as the celebrity endorser of the MVP – Mark Henry tag team.

Mayweather, as this week’s guest host on Monday Night Raw, made a non-title match pitting Unified Tag Team Champions Chris Jericho and The Big Show against MVP and Mark Henry. The champs dropped the fall to the new challengers, and now a title match will take place at the WWE Breaking Point pay per view
event on Sunday, September 13th.

Mayweather, of course, is scheduled to come out of retirement as a boxer against Juan Manuel Marquez on September 19th. The fight, dubbed “Number One/Numero Uno”, will take place live from the MGM Grand Garden Arena in Las Vegas. The fight will not only be on pay per view, but also on closed circuit in movie theatres across the country. The big push for this new revenue generator is that it will be broadcast in High Definition. NCM Fathom is the company who landed the big screen live showing of the upcoming bout, at select movie theaters nationwide.

“Having the fight in high definition in movie theaters throughout the country is unprecedented and gives boxing fans another outlet to watch the compelling action of a big-time fight,” said Richard Schaefer, CEO of Golden Boy Promotions.

“I can’t wait to get back into the ring to reclaim my rightful place as boxing’s pound-for-pound king while fans in movie theaters across the country experience it all live in high definition on 40-foot-screens,” said Mayweather. “If you can’t be ringside, this is another great way to see my return to the ring.” Ah, what a hustler!