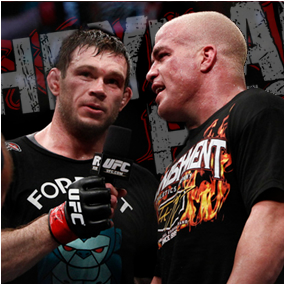 UFC 148’s Retirement Fight, An Epic End to a Famous Trilogy, Featured One of The Most Bizarre Moments in UFC History … and Forrest Griffin Has Publicly Apologized For It!

Forrest Griffin has apologized to Tito Ortiz. Not for beating him at UFC 148, but for his post-fight antics which clearly distracted from The Huntington Beach Bad Boy’s moment of glory as his legendary career inside in the Octagon came to an end.

TITO WAS INDUCTED INTO THE UFC HALL OF FAME EARLIER IN THE DAY, and was hoping to use his takedown skills coupled with his ground and pound attack to end his career with a victory over Forrest, with whom he has had two fights, both ending in split decisions, one for each competitor.

Unfortunately for the controversial Tito, he came up short on the judges’ scorecards,despite two knockdowns and a strong finish.
Tito scored an early takedown and relied on his patented ground and pound. Additionally, as Forrest crawled his way back to his feet, Tito battered with him a few short punches. Once standing, however, Forrest was the more active and effective striker, especially as his takedown defense proved effective.

The second round got off to an exciting start when a quick right from Tito decked Forrest, but Forrest  recovered quickly, slowed Tito with low kicks and popped him with uppercuts and a jab  which kept Tito at bay for the remainder of the round.

With Tito visibly tiring and Forrest coming on strong, the tide seemed to shift in the final round. But that’s when Tito showed a moment of the old Tito Ortiz and dropped Forrest with a left hook,  took him to the mat, where he then initiated a crowd-pleasing ground and pound attack.

Forrest got the judges’ nod via across-the-board 29-28 scores. But before the judge’s rendered a decision, Forrest just walked out of the Octagon. UFC President Dana White had to bolt away from cageside and chase Forrest down.

When Forrest returned to the Octagon and was declared the winner, he grabbed the microphone and replaced Joe Rogan as the man to interview Tito Ortiz for Tito’s retirement speech.

It’s a moment Forrest Griffin took to Twitter today to apologize for.

Of course, we’re HustleTweeting about Forrest Griffin’s interview with Tito Ortiz, and you’re more than welcome to join the conversation by following THE HEYMAN HUSTLE on Twitter HERE or write to us directly at hustleoncrave@gmail.com  Hey, have you checked out the Hustle’s Ultra High Quality You Tube Channel, with  exclusive videos featuring BROCK LESNAR’S “HERE COMES THE PAIN”  … ICE-T AND COCO’s SEX SECRETS … THE ULTIMATE WELTERWEIGHT BAD ASS NICK DIAZ … CONTROVERSIAL TEEN SENSATION TAYLOR MOMSEN … LEGENDARY MMA PIONEER FRANK SHAMROCK … THE WALKING RIOT MISSY HYATT … if you’re not subscribing, you’re missing something … and by the ways cheapos, it’s FREE! Yes, absolutely 100 percent FREE! What are you waiting for? Check it out HERE!