Forrest Griffin on Wedding Invites, Facing the Silva Loss, and Forrest Then vs. Forrest Now 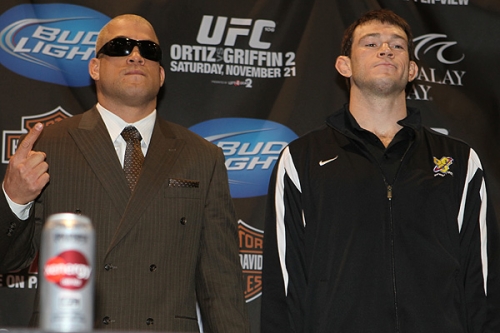 Forrest Griffin might find his rebound performance in a rematch with Tito Ortiz, who he faces this Saturday at UFC 106 in Las Vegas.

Their first bout at UFC 59 in April 2006 garnered controversy, as Ortiz wrestled aggressively in the first round, only to wane in the second and third sets before taking away a close split decision.

The “Ultimate Fighter” season one winner shares his take on the bout and much more for Heyman Hustle’s UFC 106 coverage, which is brought to you by AutoZone.

On Sending Out Wedding Invites:  “The thing you find with weddings is it’s kind of like a landslide. Once you invite one person from one clique, you really have to invite the whole clique. So it’s hard. We tried to have a wedding with about 30 people (in Savannah, Ga.). It ended up being about 50 when it was all said and done. (We invited) a bunch of guys from Hardcore (Gym) and what not. It’s in their neck of the woods. I invited a lot of my friends from Vegas in hopes they wouldn’t make the trek all the way back East.”

On His Honeymoon Cut Short: “We did the honeymoon. We were actually up in King’s Canyon and as we were coming down the mountain — we can’t get any signal up there — my phone starts dinging like a machine gun and it’s Dana texting, ‘Call me. Call me. Call me. Call me.’ Did I do something wrong? And it was just the Tito fight and I was like, ‘Oh that’s all? Nevermind.’”

The Difference between Forrest Ten and Forrest Now: “I don’t know. I liked that fight. I wasn’t very technical in the striking department. I was just kind of winging punches. He definitely saw everything I threw coming. He did a great job of blocking the jab. He used his jab real well to stop anything. When I would try and throw three or four punches he would throw his jab to try and throw me out of the rhythm. I have to move more, even though I moved decently the first fight. Some feints, some fakes, mix it up more with some kicks and stuff like that. I was basically trying to throw a 3-2 or a 2-3. You’ve got to throw one of those punches, damn it.

On Ortiz’ Past Performances: “You look at the Machida fight and it’s not really like Tito fights poorly in that fight. Tito had a strategy. I think he was winning and then with 20 seconds left in the first round — I had him winning the round — (and) he tried to explode a little to make that impression to make sure he was winning the round and he shot a little off balance for a takedown. He forced it, which is a little unusual for him, and then he got thrown, got put in a bit of a Matt Hughes position there, elbowed a little bit and now he’s gone from winning the round to clearly losing the round in 20 seconds. From that point on, he had to chase Machida, which never works out. I think he fought real well against a guy that beat me: Rashad (Evans). They fought to a draw. Great fight. Neither one of them landed that much standing up, but its ‘cause they were both throwing with such intent, I thought. I have to watch that fight again. 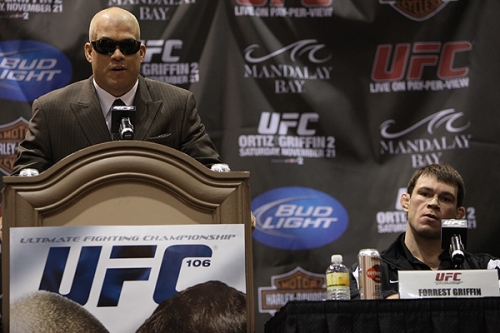