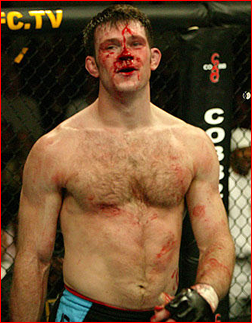 The last time we saw Forrest Griffin in the heat of battle inside a UFC Octagon, Anderson Silva had delivered such a one-sided dominant performance against the Augusta Georgia native that Silva, considered by many the best pound-for-pound MMA fighter in the world, put his hands down and stuck out his chain, daring Forrest to hit him.

Griffin went after “The Spider,” but a half-punch from Silva decked Griffin, and the right was soon over. A humiliated Forrest bolted from the cage, and ran back to the locker room. That was August 8th, right about the time UFC President patched things up with the legendary Light Heavyweight Tito Ortiz. “The Huntington Beach Bad Boy” watched Forrest run from the cage and could not believe it.

“I’d never do that,” Tito Ortiz told THE HEYMAN HUSTLE in an exclusive interview today at the UFC 106 Press Conference in Las Vegas, “I’d face defeat like a man.”

Forrest Griffin is coming off two losses in a row. Not only was he embarrassed by Silva, but he got his clock cleaned by Rashad Evans at UFC 92 on December 27th of last year. But the loss that is stuck in Forrest’s head is the controversial split decision he lost to Tito Ortiz at UFC 59 – Reality Check on April 15, 2006.

“People seem to have a fetish with Tito’s ass,” Forrest joked, “everywhere I go, people are telling me to kick Tito’s ass, whip Tito’s ass. I think it’s unhealthy!”

When asked about avenging his loss from UFC 59, Forrest said “I’m just focused on this fight. I’m coming off two losses, and now I’m in the main event. Plus, I get to fight Tito, and Tito’s just someone who is fun to fight.”