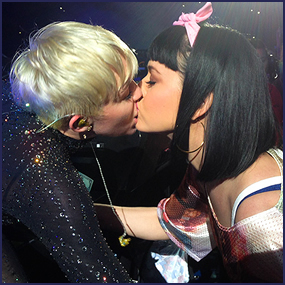 It’s the hottest celebrity cat fight in a long time …

We all remember when Katy Perry said she kissed a girl and liked it? The song was revolutionary. It brought the fantasy of men, teenagers, good girlfriends, and pre-pubescent boys into the public. Her lyrical descriptions of cherry chapstick and it feeling both wrong and right is close to what raced through our heads when we took the time to gaze at the cover of Britney Spears’ first album “…Oops I did it Again.”

Sadly, when the pressure was on, Perry fledged on her “I liked it statement.” During a concert in February Miley Cyrus and Katy Perry’s lips met. When Miley tried to slip some tongue the once queen of “kissing girls” turned her down. This sparked a brief cat fight between the two.

Perry was asked about the kiss on an Australian television show called Sunrise. She told the hosts:

“She like, tried to move her head and go deeper and I pulled away. God knows where that tongue has been.”

Miley Cyrus then took to twitter and fired back.

It seems the rivalry will be short lived though as Katy Perry also responded on twitter.

“Oooo gurrrl I’m gonna give you the BIGGEST spanking when I see you in the UK bb!”

We should all be glad that the two might patch things up. The UK, and most likely YouTube, will bear witness to one of the greater sessions of “kissing and making up.” Not since the pilgrims set sail for the United States, or the Beatles, has England been the place of something so positive.

Of course, we’re Hustletweeting about Miley and Katy, and you’re more than welcome to join the conversation HERE or write to us directly at hustleoncrave@gmail.com  Hey, have you checked out the Hustle’s Ultra High Quality You Tube Channel, with exclusive videos featuring OUR WORLD EXCLUSIVE WITH MIKE TYSON … BROCK LESNAR’S “HERE COMES THE PAIN” … ICE-T AND COCO’s SEX SECRETS … MMA BAD BOY NICK DIAZ … the list goes on and on, so if you’re not subscribing, you’re missing something … and by the ways cheapos, it’s FREE! Yes, absolutely 100 percent FREE! What are you waiting for? Check it out HERE!