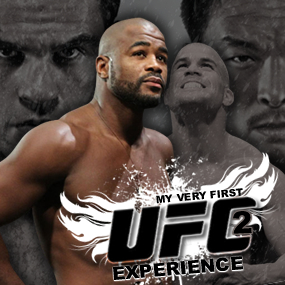 A couple of weeks ago I blogged about my first MMA live show after attending UFC 133 in Philadelphia. After the Rashad Evans vs. Tito Oritz main event, my night was just getting started.

The real main event for me was about to take place. I was lucky enough to secure a press pass and would now get to watch Dana White work a room up close and in person. As a promoter trying to build three brands with Dragon Gate USA, EVOLVE and www.WWNLive.com iPPV, Dana White is someone that has to be respected, revered and a figure to learn from. I couldn’t wait to see him in action. He didn’t disappoint.

As the fighters began to take the stage, Dana White finally took his place behind the podium with a warm and welcoming presence. I instantly felt like we were guests in his home. Well, in a way we were because he did build the house known as UFC. However, it was one of the fighters that really left a huge impression on me.

Rashad Evans took the time after his fight to quickly change into a suit, which gave him the aura of a star. He projected being a top guy, like so many greats in pro wrestling. Rory McDonald was the perfect humble, upcoming prodigy. After hearing Dana speak about them, and then their soundbites, I was instantly hooked to see what would happen in their next fights. However, it was Tito Oritz that captured my imagination.

I said in part 1 that I’m not exactly a MMA fan. I don’t know the intricacies. I am only familiar with the top names. Of course, I knew Ortiz’s place and importance in UFC history. The last time I saw him fight was against Ken Shamrock. Ortiz, in losing the main event with a valiant effort on short notice, was the ultimate pro wrestling babyface. He gave it his best, he earned respect, but then he spoke.

Oritz cut a brilliant babyface promo talking about his background, his family and his love of fighting. It was Dusty Rhodes, but completely modernized without the now antiquated delivery. I felt like applauding when he was done. I know his best days are behind him, but I am ready to put my cash on the table to watch his next fight. He talked me into the building.

When the press conference ended I noticed a bunch of reporters approached White individually. I decided to stick around. After all, I might never have a chance to be in the same room with Dana White again.

This is where I really saw what made him special. He had to be exhausted after presenting this event, conducting the press conference and dealing with countless different personalities . However, he still took the time with each reporter individually to tirelessly sell his product and answer every question with enthusiasm.

As the room began to thin out I waited around. Hey, what harm could it do to hand Dana my business card? Well, he could laugh at pro wrestling and have me escorted out of the building!

I waited till Dana got a free moment. I approached White with my business card, introduced myself and asked for a brief moment of his time. 99.9% of the people out there would have blown me off and rightfully so after such a long day. I had nothing to offer Dana. Instead, he graciously heard me out and with respect gave me some very encouraging words that I will always remember. This is why Dana White is part of that miniscule percent that is living the dream. He never stops and no matter how big he gets, he keeps winning people over one at a time.

My passion remains pro wrestling and the Dragon Gate USA and EVOLVE promotions. UFC 133, both the card and the press conference, were learning experiences. Now I feel as motivated as ever as we approach the DGUSA shows on September 9th in Indianapolis, September 10th in Chicago and September 11th in Milwaukee. If you are in the Midwest I hope we will see you there to give you an experience like I had at UFC. 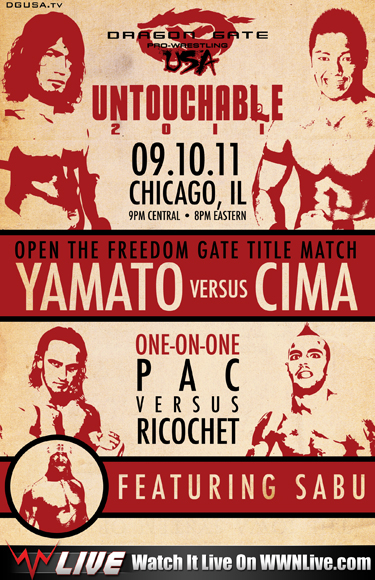 -Check this out this quick, free look at the athletic action of DGUSA: http://www.youtube.com/dgusadotTV#p/u/6/wl633IYDhbE

-Sign up for The Email News Express with exclusive news and deals for DGUSA, EVOLVE and WWNLive.com here: http://dgusa.tv/mailinglist.htm