If Donald Sterling Had Courted Gabriella Lenzi, The Entire Scandal Would Have Been Worth It 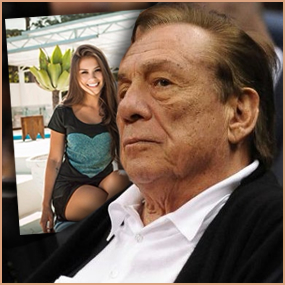 He’s West Coast Donald. Don’t look at us, we have Trump. Los Angeles has Sterling. And if the West Coast Donald had simply courted blazing hot sports WAG Gabriella Lenzi, this entire scandal just may have been worth it. She’s the scorching hot ex-GF of Brazilian FUTBOL superstar Neymar, and we can stick our reputation on the line here by insinuating (well, we’re actually out-right saying it, but we’re trying to be a bit diplomatic) that she would have a been a lot more fun and less of a headache than V. Stiviano.

The West Coast Donald is in the headlines, as the much-anticipated courtroom showdown of Sterling vs. Sterling did not materialize Monday morning in Los Angeles, as the couple fighting over ownership of the NBA Los Angeles Clippers awaited a U.S. District Court decision over whether the federal courts would intervene in the dispute. While the jurisdictional matter could take hours or days to resolve, the hostility between The West Coast Donald and Shelly Sterling played out in legal papers in which both argued that they had the best interests of their family at heart.

The West Coast Donald had his lawyers argue that he only agreed to a sale of the team with the proviso that his estranged wife would be able to maintain a stake of 20% or 30% in the team. Instead, Shelly agreed to sell 100% of the Clippers on May 29 to former Microsoft chief executive Steve Ballmer for a record $2 billion.

“Donald felt guilty that he had brought all this on his wife and she should not be punished and lose her 50% ownership in the NBA’s termination proceedings,” Sterling’s lawyers wrote in their brief in preparation for Monday’s probate trial. “When Donald realized that Ballmer was going to be 100% owner of the Clippers and Shelly was not going to retain any ownership stake…. Donald did not agree to those terms of the sale that were not consistent with Shelly’s promise to him.”

The West Coast Donald  has argued in the downtown courtroom that his wife used fraud and undue influence to get him to undergo examinations by two experts who declared him medically incapacitated. He has also contended that, regardless of the findings by the doctors, that Shelly’s sale of the Clippers should not go through because he moved to disband, or “revoke” the trust.

It’s only just begun, folks. And that’s why we feel The West Coast Donald got the short end of the stick, so to speak. He could have had so much more fun with Neymar’s former GF, the beautiful South American super model whose photos grace this very page.

Of course, we’re HustleTweeting about The West Coast Donald and Gabriella Lenzi, and you’re more than welcome to join the conversation by following the Hustle on twitter HERE or write to us directly at hustleoncrave@gmail.com Hey, have you checked out the Hustle’s Ultra High Quality You Tube Channel, with exclusive videos featuring OUR WORLD EXCLUSIVE WITH MIKE TYSON … BROCK LESNAR’S “HERE COMES THE PAIN” … ICE-T AND COCO’s SEX SECRETS … MMA BAD BOY NICK DIAZ … the list goes on and on, so if you’re not subscribing, you’re missing something … and by the ways cheapos, it’s FREE! Yes, absolutely 100 percent FREE! What are you waiting for? Check it out HERE!