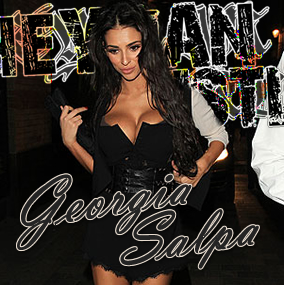 The International Reality TV Superstar Creates a Tabloid Frenzy Just By Going Out To a Nightclub!
following Just a few days ago, THE HEYMAN HUSTLE‘s Twitter page went wild when our HustleTweeters took social media to the extreme with their love for the Greek-Irish reality television show superstar who has set the UK on fire, Georgia Salpa.

Now Georgia has set the UK on fire over the weekend just by going out to a nightclub! THE DAILY MIRROR went crazy, headlining with Georgia Salpa Breaks The Boobs OR Legs Rule!

Something tells us there’ll be no complaints about this particular complete disregard for the law of decency, taste and style though – especially from the men. To be fair on Georgia, she can actually pull it off too, thanks to the fact she has never-ending perfect legs and rather a good (all rack on her.
This of course did not go unnoticed in the Celebrity Big Brother house, which Georgia was booted out of last week.

Kirk Norcross spent the first five days or so walking around with his tongue (which we couldn’t help notice was uncommonly large), quite literally scraping along the fag butt ridden floor as he fiddled with his todger – although we’ve come to the conclusion he does this around 10 times a day regardless of the company anyway.

Unfortunately for the Essex boy, it seems Georgia doesn’t go for lads that fondle themselves while talking to her. Nor was she massively turned on by his aggressive and immature behaviour when he realised he wasn’t going to get his end away in front of the nation.

Perhaps that was why she was seen on the arm of his certainly more mature father Mick Norcross when she was kicked out of the house. He invited her to his club, Sugar Hut and appeared to behave impeccably as he escorted her in and put her in a car as she left too.

Of course, it won’t have done any harm to the club’s reputation as the paps snapped away, but a bit of back scratching never did anyone any harm. Shame the same can’t be said for Kirk’s rep – your dad beats you to the girl – snigger. Actually, no it’s not at all, he deserves it.

Oh woe is me
Georgia’s obviously kicking herself for missing out though and certainly seems to be in mourning here as she sorrowfully leaves an NTA’s after party at Anaya nightclub in London in possibly the shortest dress we’ve ever seen.

She certainly knows how to make herself more interesting doesn’t she.

Meanwhile, our friends at THE SUN reported All Eyes on Georgia Salpa’s Thighs!

UNDERWEAR model Georgia Salpa was the centre of attention when she bared her long legs in an outfit that could well have come from the lingerie department.
It appeared as though the glamour model left her dress at home to wear this bum-skimming ensemble as she partied at the NTA’s after party.
The former Celeb Big Brother contestant, 26, was seen in London’s Mayfair last night after attending a knees-up at Anaya nightclub. She also partied at celeb haunt Cirque du Soir.

As she posed for photographers her bottom made a cheeky escape from her barely-there playsuit.

But Irish lass Georgia did not seem to mind much, grinning backwards as she walked away.

And the internationally-popular OK! Magazine jumped on the Georgia Salpa bandwagon, reporting:

SHE’S only recently left Celebrity Big Brother.
But Georgia Salpa ensured all eyes were on her as she appeared at the NTAs 2012 after party at King’s Club, London.

The glamour girl, who was evicted from Celebrity Big Brother last week, showed off her enviable figure in a barely there black outfit, which was teamed with a belt and nude heels.

Georgia’s curves were very much on display as she appeared with a friend at the star-studded event.

She may not be on CBB any more but she’s certainly still got the ability to get attention!

Of course, we’re HustleTweeting about Georgia Salpa, and you’re more than welcome to join the conversation byTHE HEYMAN HUSTLE on Twitter HERE or write to us directly at hustleoncrave@gmail.com  Hey, have you checked out the Hustle’s Ultra High Quality You Tube Channel, with  exclusive videos featuring BROCK LESNAR’S “HERE COMES THE PAIN”  … ICE-T AND COCO’s SEX SECRETS … THE ULTIMATE WELTERWEIGHT BAD ASS NICK DIAZ … CONTROVERSIAL TEEN SENSATION TAYLOR MOMSEN … LEGENDARY MMA PIONEER FRANK SHAMROCK … THE WALKING RIOT MISSY HYATT … if you’re not subscribing, you’re missing something … and by the ways cheapos, it’s FREE! Yes, absolutely 100 percent FREE! What are you waiting for? Check it out HERE!

CLICK ON THE PICS BELOW TO SEE EVEN MORE
OF THE IRISH-GREEK SENSATION TAKING THE UK BY STORM, HUSTLE HOTTIE GEORGIA SALPA