Get Your Asses Ready For Triple 9 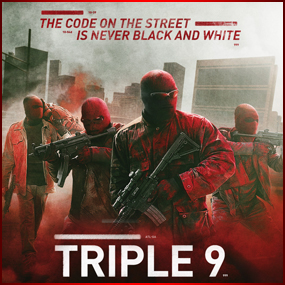 Woody Harrelson, Casey Affleck, Aaron Paul, Kate Winslet, Norman Reedus, Chewitel Ojiafor and Anthony Mackie are set to explode on the big screen in February with Triple 9, which stands for police code 999, which means officer down. A crew of dirty cops is blackmailed by the Russian mob to commit a virtually impossible heist and the only way to pull it off is to manufacture a 999 to divert the entire force away from their activities. However, their plan is turned upside down when the unsuspecting rookie they set up to die foils the attack, triggering an action-packed finale tangled with double-crosses, greed and revenge. Oh yeah. From what we hear on the inside, Kate Winslet is one bad bitch in this movie.

Of course, we’re HustleTweeting about Triple 9, and you’re more than welcome to join by following the Hustle on Twitter HERE or write to us directly at hustleoncrave@gmail.com Hey, have you checked out the Hustle’s Ultra High Quality YouTube Channel, with exclusive videos featuring the #HUSTLEBOOTYTEMPTATS SUPERMODEL OF THE YEAR … OUR WORLD EXCLUSIVE WITH MIKE TYSON … BROCK LESNAR’S “HERE COMES THE PAIN” … ICE-T AND COCO’s SEX SECRETS … MMA BAD BOY NICK DIAZ … the list goes on and on, so if you’re not subscribing, you’re missing something … and by the ways cheapos, it’s FREE! Yes, absolutely 100 percent FREE! What are you waiting for? Check it out HERE!