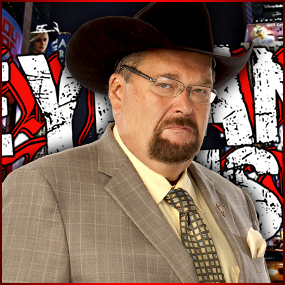 The WWE Hall of Famer would love for you to join him this Saturday night in New York City!

Howdy folks…that’s Oklahoma lingo for hello… this is good Ol J.R. Jim Ross, WWE Hall of Famer (Class of 2007)  inviting you to my only New York City show of the year  this Saturday Night, August 22 at the Gramercy Theater.  RINGSIDE with Jim Ross is a humorous and enlightening journey through my 40 year career in the wacky world of pro wrestling that began in a small, Oklahoma territory, going through Madison Square Garden, and culminating with being Executive Vice President of WWE.

These road stores are sensational but true because I lived them and, more importantly, survived them although two marriages didn’t. My career spans local, syndicated TV to the cable TV explosion of the 80’s, the advent of pay per view broadcasts, corporate ownership of a “rasslin” company to working with as an executive with a publicly traded sports entertainment conglomerate. The topics that we will talk about are endless and will be covered in an uncensored fashion during the Q&A portion of our live, two hour show.

Would you step into a shower with two, nude, 600+ pound twin men to wash their backs to make sure that your main event attractions did not desert you? I did and you will hear how and why I went where few men have ever traveled to make sure my tour wasn’t destroyed.

Would you take a cash bribe along with a new, ‘Polaroid’ camera to sneak into the shower to take a candid photo of Andre the Giant so a female fan could satisfy her curiosity that Andre really was a GIANT?

How would you respond as a 22 year old kid to the blind owner of the territory, that gave you your first break, as he shared with you his plan, that included you, to murder the Million Dollar Man Ted DiBiase? Yes, MURDER!

The road stores are endless and hilarious and involve some of the biggest names in the history of the pro wrestling business. It’s the most unique “wrestling” show you will ever enjoy.

I only play NYC once a year and this Saturday night August 22 at the Gramercy Theater is it! The show kicks off at 8 pm and tickets are still available at ticketmaster.com or the box office starting at only $25.

There’s a ticket with your name on it and you have my personal invitation to our show and my guarantee that you will have a helluva night!

I sincerely hope that you will join me at the Gramercy Theater for this opportunity to embrace the wrestling business from the perspective of a life long fan that ended up with the best seat in the house while broadcasting some of the biggest events in the history of the business and signing some of wrestling’s biggest stars including Stone Cold Steve Austin, The Rock, John Cena, Brock Lesnar and Kurt Angle among countless other superstars who have gone on to earn worldwide fame.

No one in the business can replicate this journey of overcoming the odds as being a chubby, Southern boy with an Okie accent to earning Hall of Fame status, writing two New York Times Best selling books and becoming universally acclaimed as the “Voice of Wrestling.”

Looking forward to seeing you there, this Saturday night at the Gramercy Theater!