GSP Dominates Nick Diaz, Who Says He's Retiring ... Not Showing Up at Press Conference ... Only to Show Up and Un-Retire 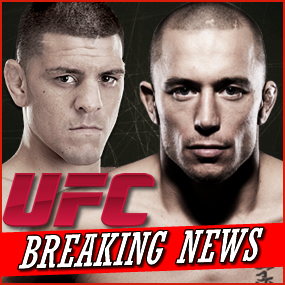 It was a five round shutout by Georges St-Pierre, but all eyes are still on Nick Diaz!

Undisputed UFC Welterweight Champion Georges St-Pierre dominated Nick Diaz for five straight rounds, defeating the former Strikeforce Welterweight Champion 50-45 on all three judges scorecards in their heavily-hyped main event in front of a sellout crowd at UFC 158 from the Bell Centre in Montreal.

When the fight was over, Diaz seemed to have announced his retirement. “I don’t want to make excuses but I think I might have been flat from a year off,” Diaz told Joe Rogan while still inside the Octagon. “I want to thank Georges St-Pierre for giving me the credit I feel I deserve. I think I’m done. I’m tired of getting banged up.”

When THE UFC 158 POST-FIGHT PRESS CONFERENCE began, UFC President Dana White informed the media that Diaz would not attend the media Q&A, as he stated he had done his job and was outta there. But towards the end of the presser, Diaz walked in and captured everyone’s attention, asking for a rematch with GSP, and also challenging Anderson Silva.

Of course, we’re HustleTweeting about GSP vs Nick Diaz, and you’re more than welcome to join us by following THE HEYMAN HUSTLE on twitter HERE or write us directly at hustleoncrave@gmail.com  Hey, have you checked out the Hustle’s Ultra High Quality You Tube Channel, with exclusive videos featuring OUR WORLD EXCLUSIVE WITH MIKE TYSON … BROCK LESNAR’S “HERE COMES THE PAIN” … ICE-T AND COCO’s SEX SECRETS … TEEN SENSATION TAYLOR MOMSEN … UFC BAD BOY NICK DIAZ … THE WALKING RIOT MISSY HYATT if you’re not subscribing, you’re missing something … and by the ways cheapos, it’s FREE! Yes, absolutely 100 percent FREE! What are you waiting for? Check it out HERE!