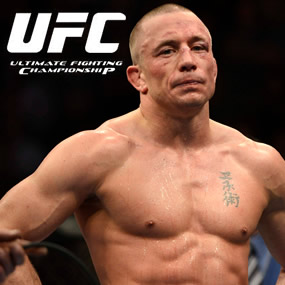 IF … and that’s a big IF … IF the most celebrated Welterweight in MMA history wants to return to the Octagon, he’s going to have to wait six months to a year. Late Breaking News from Montreal …

Former Undisputed UFC Welterweight Champion of the World Georges St-Pierre has torn the ACL in his left knee, an injury he previously corrected via surgery on his right knee. GSP announced the bad news on his official Facebook page, stating “Just got confirmation that I tore my left knee ACL during training this week. Surgery in a few days and rehab starts right away …  We all face challenges in our lives and I know only one way to take this one: Pain, hard work, no shortcuts and I will soon be back at 100%. Stay tuned and thanks for your amazing support, as always.”

In 2011, St-Pierre was forced out of a UFC 137 title defense against NICK DIAZ when he sprained the MCL in his right knee. Overcompensating for the injury, GSP ended up tearing his right ACL that December, necessitating surgey.

GSP is in the midst of a hiatus from UFC, as the 32 year old vacated his championship and walked away from MMA for an  indefinite length of time, citing undisclosed personal issues, but according to several close to the legendary fighter, he also walked away due to his dissatisfaction with drug testing regulations.

“The system is not in place,” he stated. “There are no guidelines. The way they test now, it’s not good. It’s not good the way they test. If you get caught on steroids right now, it’s because you’re very disorganized. It’s so easy to beat the test. It’s ridiculous. It’s not a real test. … There needs to be random testing by an independent organization that has no interest in the money for the fight. That’s how it should be done. That’s how it is in any other sport.”

Of course, we’re HustleTweeting about GSP, and you’re more than welcome to join the conversation (and you have to realize, this is one ridiculously lively conversation) by writing us on twitter HERE or write to us directly at hustleoncrave@gmail.com  Hey, have you checked out the Hustle’s Ultra High Quality You Tube Channel, with exclusive videos featuring OUR WORLD EXCLUSIVE WITH MIKE TYSON … BROCK LESNAR’S “HERE COMES THE PAIN” … ICE-T AND COCO’s SEX SECRETS … MMA BAD BOY NICK DIAZ … the list goes on and on, so if you’re not subscribing, you’re missing something … and by the ways cheapos, it’s FREE! Yes, absolutely 100 percent FREE! What are you waiting for? Check it out HERE!