GSP Taking Leave of Absence From UFC, Insists It's Not a Retirement 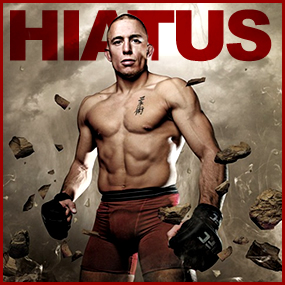 The Undisputed Welterweight Championship of the World is Vacant, To Be Decided at UFC 171!

Undisputed UFC Welterweight Champion Georges St-Pierre has announced  he will step away from fighting for an undetermined period of time. GSP will vacate the title, which he defended for the ninth time last month in a controversial decision victory over Johny Hendricks. UFC President Dana White announced Hendriks will now fight Robbie Lawler for the vacant title on March 15th in Dallas, Texas.

The 32-year-old GSP cited personal issues and a severe reaction to the intensifying pressure of being a star athlete for his decision to walk away at this time. “My life is a frickin’ zoo right now,” the Montreal native vented during a media conference call.

The notoriously-private GSP refused to explain the personal issues he keeps alluding to, but also discussed the intense pressure he feels as champion and current top gate attraction for UFC.

GSP added, “I wanted to be the greatest, and also I said before when I do things, I want to do things to be remembered, to make a difference in the sport, make the sport reach another level.”

GSP said he hoped for a normal life and that he didn’t “want people thinking about me.”

Dana White noted, “(GSP has) these issues that he needs to deal with, and once he deals with them, he can focus on training and being a fighter again.”

Of course, we’re HustleTweeting about GSP, and you’re more than welcome to join the conversation by following THE HEYMAN HUSTLE and telling us what YOU think RIGHT F’N HERE! We got the whole social media thing covered, so check out the Hustle’s Ultra High Quality You Tube Channel, with exclusive videos featuring OUR WORLD EXCLUSIVE WITH MIKE TYSON … BROCK LESNAR’S “HERE COMES THE PAIN” … ICE-T AND COCO’s SEX SECRETS … TEEN SENSATION TAYLOR MOMSEN … UFC BAD BOY NICK DIAZ … THE WALKING RIOT MISSY HYATT if you’re not subscribing, you’re missing something … and by the ways cheapos, it’s FREE! Yes, absolutely 100 percent FREE! What are you waiting for? Check it out HERE!