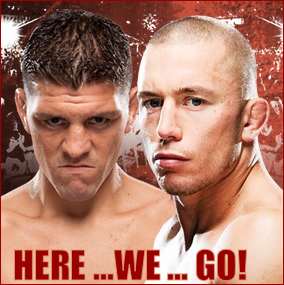 Diaz has been clamoring for a fight with GSP despite the two being in separate leagues, a hurdle that was obviously cleared by Zuffa (parent company of UFC)’s acquisition of Strikeforce in March. The anticipation for the fight grew when GSP successfully defended his championship against Diaz’s teammate Jake Shields. Fellow teammate Gilbert Melendez is the Strikeforce Lightweight Champion, and many are hoping to see a showdown between Melendez and UFC Lightweight Champion Frankie Edgar as well. There are those who feel Melendez qualifies for the tag of “best pound-for-pound fighter in the world,” while the NoCal native has been concentrating on gaining recognition as the best lightweight on the globe. He knows he needs to fight Edgar to prove that claim. Edgar, with two straight wins over the legendary BJ Penn, has desires of his own in terms of being recognized as the best on the planet.

St-Pierre is in the midst of a 9-fight winning streak, and has won 15 of his last 16 fights. Diaz returns to the Octagon for the first time since his 2006 firing from the company. Since then, he’s gone 11-1, which includes his current 10-fight winning streak.

More details on this breaking news story as they become available.

We’re HustleTweeting about GSP vs Nick Diaz, and you’re more than welcome to join the conversation by following THE HEYMAN HUSTLE on Twitter HERE

CHECK OUT STRIKEFORCE WELTERWEIGHT CHAMPION NICK DIAZ
AS THE FIRST GUEST ON THE SECOND SEASON OF “THE HEYMAN HUSTLE!”