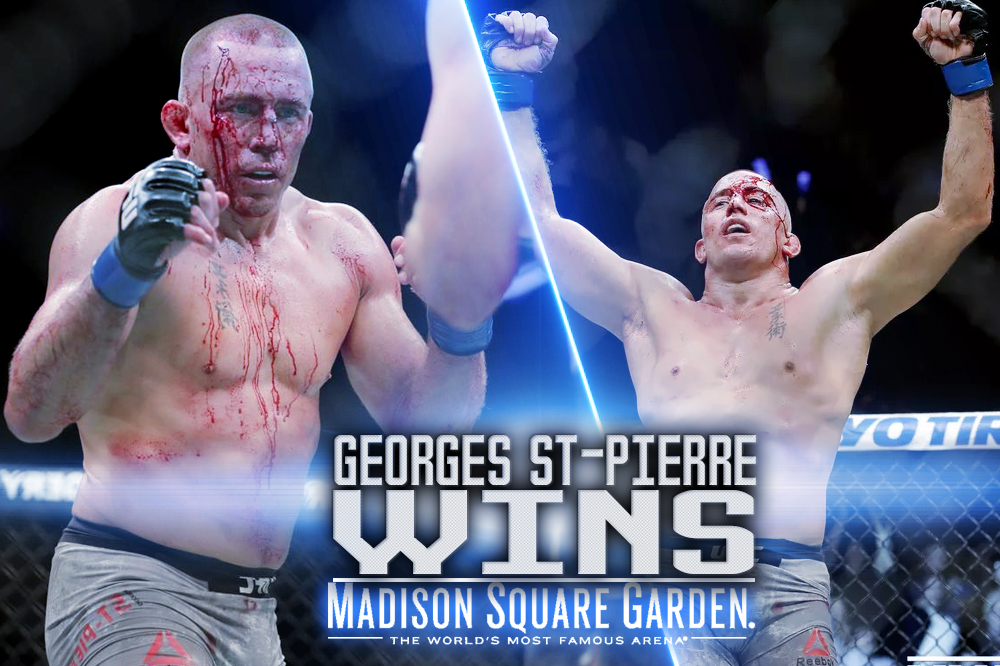 Georges St-Pierre returned to the Octagon. The critics have been silenced. It’s 2017. GSP still rules.

The legendary St-Pierre’s comeback occurred at the World’s Most Famous Arena, Madison Square Garden in New York City, as GSP choked out Michael Bisping at 4:23 of the third round to become the new Undisputed Middleweight Champion of the World.

A former two-time Welterweight Champion, GSP moved up to the 185 pound division to fight Bisping in the main event of UFC 217.

St-Pierre showed little sign of ring rust in the first round, beating Bisping to the strike and landing his first takedown since 2013. He won the round on all three judges’ scorecards, though the champion rallied to take the second. There seemed to be big concern when GSP scored another takedown and then Bisping opened him up with a sharp elbow. The blood was all over GSP‘s face and it was getting into his eyes. But he connected with a great left hook in the middle of an exchange and Bisping dropped. St-Pierre swarmed and eventually took Bisping’s back. He locked in the rear naked choke and Bisping went out.

“It is a dream come true,” St-Pierre said. “I don’t have the words. Obviously, this was not my weight class. I took this fight to challenge myself and I am honored to be champion once again.”

We’re HustleTweeting about GSP at MSG, and you’re more than welcome to join the conversation on the Hustle Twitter HERE and also on our hyper-interactive Facebook page HERE!