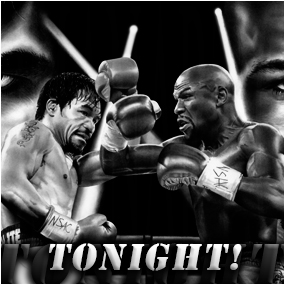 THE HEYMAN HUSTLE lets you know the way to watch, and what time Floyd and Manny are scheduled to walk out to the ring!

We here at The Heyman Hustle are so kind and generous that we are going to tell you everything you need to know about Floyd Mayweather vs. Manny Pacquiao.

Tonight’s bout between the two boxers is being dubbed “The Fight of the Century”, and there’s a great reason for that. We’ve been waiting five years for this match to happen, and it’s finally happening! The Pay-Per-View will mark the first time since the 2002 fight between Mike Tyson and Lennox Lewis that two premium cable networks have worked together.

How much is it? Well this is the Fight of the Century, so expect to pay a pretty penny. Tonight’s event will cost $90 for standard definition and $100 for high definition making it the most expensive Pay-Per-View in boxing history! This is a must-see event that the world will talk about for ages and if you’re not watching tonight, you’re missing history. For those looking to watch the fight online, you’re out of luck as the option of online streaming the event is not available.

Those involved in tonight’s fight have informed The Heyman Hustle that it’s best to order the Pay-Per-View prior to it starting as the high-demand for the fight can likely jam ordering systems!

Of course, we’re HustleTweeting about The Fight of the Century and you’re more than welcome to join the conversation by following The Heyman Hustle on Twitter HERE! You can also post your thoughts on our Facebook page HERE!  If you feel compelled to write us, please do so at HustleOnCrave (at) Gmail.com