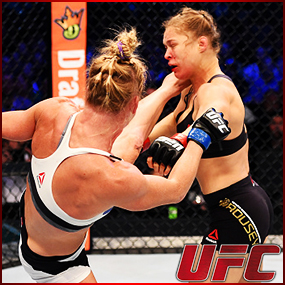 Rowdy Ronda is Dethroned in Australia! 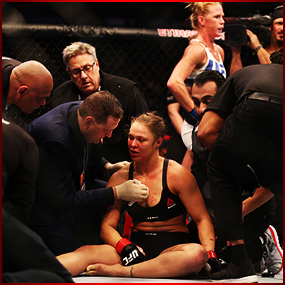 Rowdy Ronda is Dethroned in Australia!

Holly Holm is the new UFC Women’s Bantamweight Champion, crushing Ronda Rousey (who needed smelling salts to revive) with a brutal, brilliant head kick in round two. The undefeated Holm used all of Rousey’s aggression against her, winning round one and dominating Rousey in an almost embarrassing fashion in round two. Rousey was actually losing her balance, desperately trying to nail Holm, whose cool demeanor led to her not only beating Rousey, but giving her a beating in the process.

Of course, we’re HustleTweeting about Holly Holm Defeating Ronda Rousey, and you’re more than welcome to join the conversation by following the Hustle on Twitter HERE or write to us directly at hustleoncrave@gmail.com Hey, have you checked out the Hustle’s Ultra High Quality You Tube Channel, with exclusive videos featuring the #HUSTLEBOOTYTEMPTATS SUPERMODEL OF THE YEAR … OUR WORLD EXCLUSIVE WITH MIKE TYSON … BROCK LESNAR’S “HERE COMES THE PAIN” … ICE-T AND COCO’s SEX SECRETS … MMA BAD BOY NICK DIAZ … the list goes on and on, so if you’re not subscribing, you’re missing something … and by the ways cheapos, it’s FREE! Yes, absolutely 100 percent FREE! What are you waiting for? Check it out HERE