HUSTLE EXCLUSIVE! This Man Could Be The Next Mr. Pam Anderson (or, maybe just another Hepatitis carrier)! 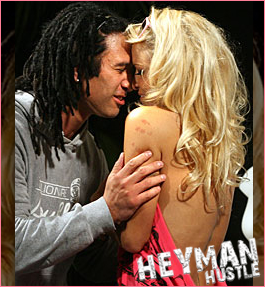 His name is Karl Te Nana, and is a 34 year old major superstar in New Zealand. The man who popped Pam Anderson’s “Hongi” cherry is the former captain of the New Zealand Seven Rugby team, where he received great acclaim for a Gold Medal victory in the 2002 Commonwealth Games.

Nowadays, Karl Te Nana can be found on the Internet checking out THE HEYMAN HUSTLE (hey, why not?) and hosting a weekly Rugby program (or is that programme, since we’re dealing with New Zealanders?) on SkyTV called “This Given Sunday.”

You can also check out an exclusive video of the entire press conference, including the “Hongi” (it’s like a butterfly kiss, with the promise to exchange bodily fluids later) AT THIS LINK

We also have the local news report from Auckland, New Zealand which shows the mass media hysteria created by Pammy as she launches her new A*Muse fashion line while managing wardrobe malfunctions and getting hongis from former Rugby captains. That video is available exclusively for our Hustlers HERE

IT’S A WILD VERSION OF THE MEDIA WATCH TONIGHT,
SO PLEASE BE PREPARED FOR JUST ABOUT ANYTHING!
FOR THE STORY BEHIND ANY PIC, JUST CLICK!