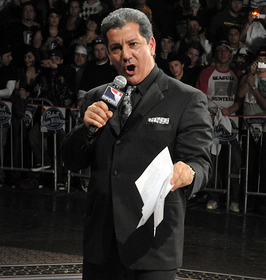 UFC Octagon Announcer (he ain’t just a ring announcer, he announces from the Octagon, damnit!) Bruce Buffer spoke exclusively with THE HEYMAN HUSTLE just moments ago about UFC 106’s main event of Tito Ortiz vs Forrest Griffin, and the addition of Koshcheck vs Johnson to the card that originally featured Brock Lesnar vs Shane Carwin.

Buffer was his usual diplomatic self, but he let his feelings known about Tito Ortiz’s ability to “carry a card.”

You can check out more from the master of the 360-Degree Octagon Intros at www.bufferzone.net