HustleTweet Question of the Night: Seeking Justice ... Or Displaying Greed? 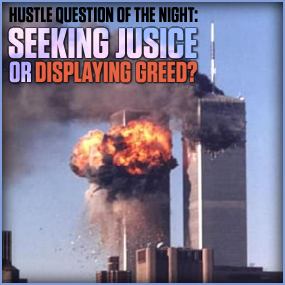 The owners of the fallen World Trade Center towers have lost a federal lawsuit seeking billions more in insurance money from the 9/11 Attacks!

In a landmark decision, a federal judge has decided the owners of the fallen World Trade Center towers can’t demand billions of dollars more in insurance money for the destruction caused by the 9/11 Attacks.

After hearing testimony by economic experts for the World Trade Center owners and for the airlines linked to the planes that were hijacked in the attacks, Judge Alvin Hellerstein handed down his ruling. The non-jury trial was held to decide whether the owners could collect more than the nearly $5 billion they’ve already received toward reconstruction.

The judge said that though he was ruling against the World Trade Center owners, they deserved credit for spearheading the recovery effort at the 16-acre site in Lower Manhattan.

“You were dealt a very severe blow,” the judge stated, adding the developers  “create beauty out the ashes of the destruction.”

Bud Perrone, a spokesman for Silverstein Properties said the developer was “deeply disappointed” by the ruling and would appeal but remains committed to the ongoing construction projects on the site.

Perrone continued, “We will not rest until we have exhausted every option to assure that the aviation industry’s insurers pay their fair share toward the complete rebuilding of the World Trade Center.”

During the four-day proceeding, Silverstein’s attorneys had insisted that the aviation companies owed at least $3.5 billion for letting hijackers board planes that destroyed three skyscrapers on September  11, 2001: the fabled Twin Towers and also 7 World Trade Center, a 47-story building that caught fire after debris from one of the jet crashes pierced its facade and collapsed hours later.

He successfully argued that an $8.5 billion total recovery would be more than two and a half times the fair value of the buildings that fell.

However,  attorney Richard Williamson, who was representing World Trade Center Properties, said damages from the attacks had totaled at least $7.2 billion.

So … is this a case of justice being sought, or greed at its most flagrant? We’re HustleTweeting about this right now, and you’re more than welcome to join the conversation by following us on twitter HERE or write us directly at hustleoncrave@gmail.com  Hey, have you checked out the Hustle’s Ultra High Quality You Tube Channel, with exclusive videos featuring OUR WORLD EXCLUSIVE WITH MIKE TYSON … BROCK LESNAR’S “HERE COMES THE PAIN” … ICE-T AND COCO’s SEX SECRETS … TEEN SENSATION TAYLOR MOMSEN … UFC BAD BOY NICK DIAZ … THE WALKING RIOT MISSY HYATT if you’re not subscribing, you’re missing something … and by the ways cheapos, it’s FREE! Yes, absolutely 100 percent FREE! What are you waiting for? Check it out HERE!