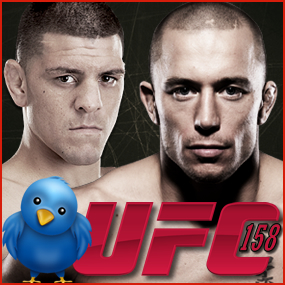 It’s your chance to be interactive with our very own Hustler De Tuti Hustlers during the most highly anticipated grudge match in the history of the Octagon!

The big question is whether or not Diaz has gotten inside GSP’s head. “Georges is being weird right now,” UFC President Dana White said  (or hyped) on Thursday. “Georges isn’t close to being Georges. There’s no doubt this thing has messed with his head. I just think he’s pissed. He’s a in a different place than he’s ever been because he’s mad.”

You’ll see below a number of links which highlight the trash talking of Diaz and the slow building boil GSP has demonstrated. It was impossible not to notice GSP’s uncharacteristic sighs and angry facial expressions at the pre-fight press conference. His short interview at the weigh-ins last night showed a man who can’t wait to get into the Octagon. That can work against GSP, who has always been in control of his emotions, even when he vowed to teach some manners to an opponent before. REMEMBER THE VICIOUS BEATING GSP GAVE JOSH KOSCHECK (Warning: Graphic Photos)?

“As crazy as Nick Diaz seems,” White stated, “there’s strategy in it.”

Of course, we’re HustleTweeting about UFC 158 St-Pierre vs Diaz, and we want you to join us by following THE HEYMAN HUSTLE on twitter HERE or write us directly at hustleoncrave@gmail.com  Hey, have you checked out the Hustle’s Ultra High Quality You Tube Channel, with exclusive videos featuring OUR WORLD EXCLUSIVE WITH MIKE TYSON … BROCK LESNAR’S “HERE COMES THE PAIN” … ICE-T AND COCO’s SEX SECRETS … TEEN SENSATION TAYLOR MOMSEN … UFC BAD BOY NICK DIAZ … THE WALKING RIOT MISSY HYATT if you’re not subscribing, you’re missing something … and by the ways cheapos, it’s FREE! Yes, absolutely 100 percent FREE! What are you waiting for? Check it out HERE!